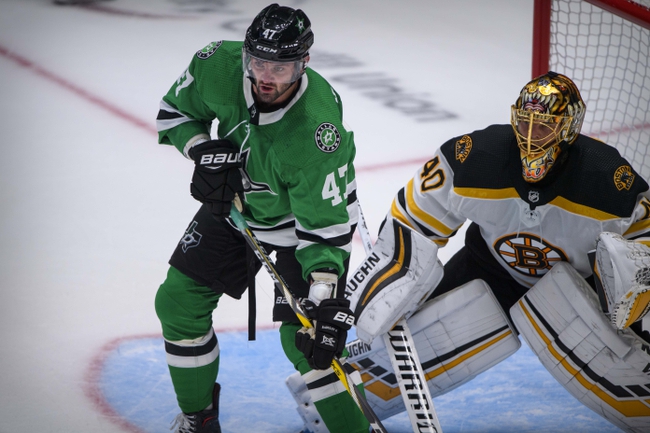 Where to Watch: Sportsnet, NBCS Stream live sports and exclusive originals on ESPN+. Sign up now!

The Dallas Stars and the Boston Bruins meet in NHL action from the TD Garden on Thursday night.

The Dallas Stars come into this game looking to build on back-to-back wins after a 4-1 win over Carolina last time out. Tyler Seguin opened the scoring for Dallas in the first minute of the game before Roope Hintz and Jason Dickinson pushed the lead to 3-0 with a pair of goals 1:49 apart. Carolina pulled a goal back just over a couple minutes into the 2nd period before Denis Gurianov restored the three-goal cushion with just over six minutes to go in the middle period. Carolina outshot the Stars by a whopping 18-1 margin in the 3rd period, but the Stars would ride the 4-1 lead all the way to the finish line to pick up a solid road win. Anton Khudobin got the win to improve to 16-7-2 on the year after stopping 40 of 41 shots faced in the winning effort.

The Boston Bruins will try to rebound from back-to-back losses after a 5-2 loss to Calgary last time out. Calgary opened the scoring with the lone goal of the opening period before Brad Marchand tied the game at one for Boston short-handed just after the midway point of the 2nd period. The Flames re-took the lead and made it 3-1 in a span of 1:12 later in the 2nd but Chris Wagner would pull one back for the B’s with just under seven minutes to go in regulation. 3-2 was as close as the Bruins would get, as Calgary restored the two-goal lead with 1:30 to play and iced the win with an empty-netter just :41 after that to lock up shop. Tuukka Rask took the loss, falling to 23-7-6 on the year after giving up 4 goals on 30 shots faced in the losing effort.

I understand that Boston has been tough to crack on home ice for the better part of this season. However, Dallas continues to play strong hockey in their own right and have thrived in the underdog role away from home, winning 5 of their last 6 as a dog. Boston has just been looking more and more mortal as of late, and Dallas could catch Boston reeling here off of back-to-back losses, so I’ll take my chances with Dallas and the plus money here.