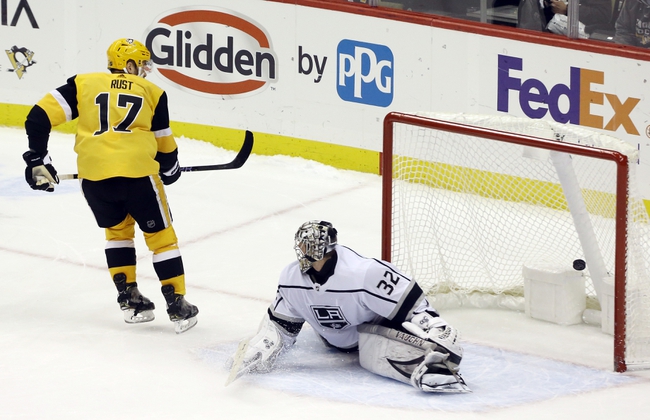 The Pittsburgh Penguins and the Los Angeles Kings meet in NHL action from the Staples Center on Wednesday night.

The Pittsburgh Penguins will be out to snap a three-game losing skid after a 5-3 loss to Washington last time out. Washington opened the scoring with the lone goal of the opening period before Patric Hornqvist and Sidney Crosby pushed the Penguins in front with goals :26 apart in the 2nd period. Washington re-took the lead with a pair of goals within the first five minutes of the 3rd. Evgeni Malkin tied the game at three just before the nine minute mark of the 3rd, but Washington would take the lead for good just 1:50 later and would ice the win with an empty-net goal in the final minute of the 3rd period. Matt Murray took the loss, falling to 17-9-5 on the year after allowing 4 goals on 22 shots faced in the losing effort.

The Los Angeles Kings will look to rebound from back-to-back losses after a 4-2 loss to the Edmonton Oilers last time out. Edmonton opened the scoring with the lone goal of the opening period before surging ahead 3-0 late in the 2nd period. Anze Kopitar got the Kings on the board with just over a minute to go in the 2nd period and Dustin Brown would cut the deficit to 3-2 within the first minute of the 3rd, but that’s as close as the Kings would get as Edmonton sealed the victory with an empty-netter late in the 3rd. Calvin Petersen took the loss, falling to 1-3-0 on the year after allowing 3 goals on 30 shots faced in the losing effort.

The plus money with Los Angeles is tempting given that the Kings play their best at home and Pittsburgh’s allowed 14 goals in their last 3 games. However, the Penguins are the only team here that’s going anywhere come playoff time, and I just think that the Penguins need this more aside from the fact that Pittsburgh is too good to keep losing games the way they have been. I’ll side with Pittsburgh on the puck line to get the price down as I think the Penguins come in and stifle the Kings here.