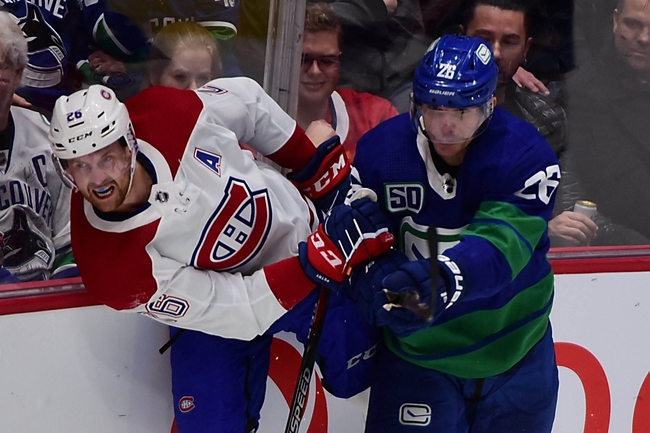 The Vancouver Canucks and the Montreal Canadiens meet in NHL action from the Bell Centre on Tuesday night.

The Vancouver Canucks will look to build on a 9-3 thrashing of the Boston Bruins in their last outing. Troy Stecher opened the scoring for Vancouver just over four minutes into the game before Boston tied the game at one just 2:52 later. Bo Horvat restored Vancouver’s lead just over four minutes later before Adam Gaudette pushed the lead to 3-1 5:32 into the 2nd period. Tanner Pearson and Loui Eriksson would score :51 apart to push the lead to 5-1 later in the 2nd. Elias Pettersson made it 6-1 just under a minute into the 3rd, but Boston would cut the deficit to 6-3 with goals 1:43 apart in the 3rd. Tyler Toffoli would score twice in 1:53 later in the final period to reclaim the five-goal lead and Jake Virtanen added a 9th goal for good measure with just under two minutes to go. Jacob Markstrom got the win to improve to 23-16-4 on the year after stopping 34 of 37 shots faced in the winning effort.

The Montreal Canadiens will look to build on back-to-back wins after a 3-0 win over Ottawa last time out. Max Domi opened the scoring for the Habs just 1:13 into the game before doubling the lead with his 2nd goal of the game just after the midway point of the opening frame. Paul Byron pushed the lead to 3-0 with just over two minutes to go in the 2nd and that’s all the Canadiens would need despite Ottawa outshooting the Habs 10-8 in the 3rd period. Carey Price got the win to improve to 26-22-5 on the year after stopping all 30 shots faced for his 4th shutout of the season.

I get Montreal being favored at home because the Habs are more desperate for wins, are at home, and there may be some concern for an offensive letdown for Vancouver after scoring 9 against Boston. However, there’s just too much value to pass up with Vancouver and plus money given how well the Canucks have been playing lately. If the Canucks can put up 9 on a fully-loaded Boston team, I’m not sure I like Montreal’s chances, especially when the Habs didn’t really make many moves to make themselves better at the trade deadline. I’ll side with Vancouver and the plus money here.