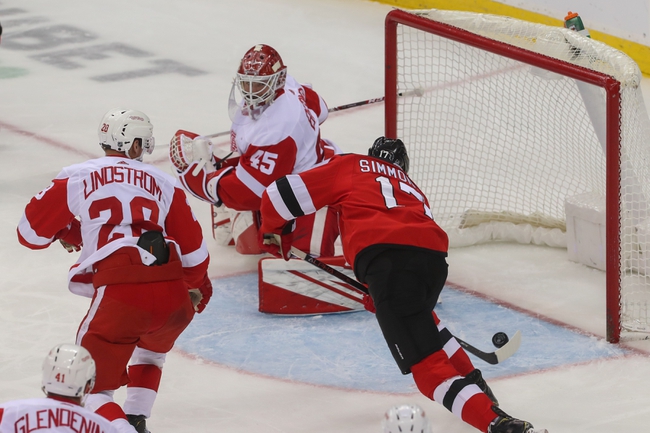 Where to Watch: FS-Detroit, MSG+ Stream live sports and exclusive originals on ESPN+. Sign up now!

The New Jersey Devils and the Detroit Red Wings meet in NHL action from Little Caesars Arena on Tuesday night.

The New Jersey Devils will look to build on back-to-back wins after a 3-2 win over Washington last time out. Jesper Bratt staked New Jersey an early lead with the game’s opening goal with seven minutes to go in the period before Wayne Simmonds doubled the lead around the same point of the 2nd period. Washington responded just 2:32 later and tied the game less than five minutes into the 3rd, but Dan Severson would be the hero for the Devils, burying what would be the game-winning goal with less than two minutes to go in the game. MacKenzie Blackwood got the win to improve to 21-12-7 on the year.

The Detroit Red Wings will look to rebound from back-to-back losses after a 4-2 loss to Calgary last time out. Calgary jumped out to an early 2-0 lead with a pair of goals 1:17 apart early in in the 1st before Dylan Larkin got the Wings on the board with just over four minutes to go in the opening period. Calgary restored the two goal lead with the lone goal of the 2nd, but Larkin would make things interesting, scoring with two minutes to go in the 3rd to cut the deficit to 3-2. The Wings tried to claw back, but Calgary would ice the win with an empty-netter late to send the Red Wings to yet another loss. Jonathan Bernier took the loss, falling to 13-19-2 on the year after allowing 3 goals on 30 shots faced in the losing effort.

I’m not trying to get behind either of these teams as both are just playing out the string and looking forward to next season. With that said, the Devils are playing better hockey than Detroit, and the Red Wings are just 11-45-4 against the rest of the NHL this season. On top of that, trading away your best players like the Wings did shipping Andreas Athanasiou to Edmonton isn’t going to help you win games, and we can see that the Red Wings now have their sights set on trying to acquire the #1 pick. New Jersey is at least still playing for some pride at this point and even on the road, I’ll have to lay the juice with the Devils here.