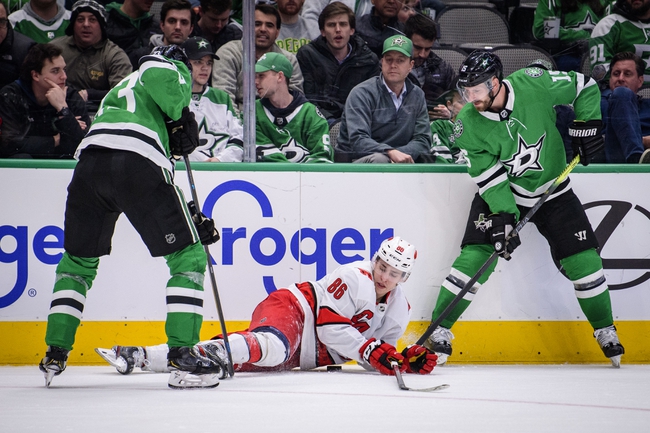 Where to Watch: FS-Southwest, FS-Carolina Stream live sports and exclusive originals on ESPN+. Sign up now!

The Dallas Stars and the Carolina Hurricanes meet in NHL action from the PNC Arena on Tuesday night.

The Dallas Stars come into this one looking to build on a 2-1 win over the Chicago Blackhawks in their last outing. Joe Pavelski opened the scoring for the Stars with just under five minutes to go in the opening period before Chicago tied the game at one just over seven minutes into the middle period. Tyler Seguin responded by giving the Stars the lead with just 3:31 to go in the 2nd and despite their best efforts. Chicago couldn’t find a game-tying goal the rest of the way as Dallas held on for the win. Anton Khudobin got the win to improve to 15-7-2 on the year after stopping 31 of 32 shots faced in the winning effort.

The Carolina Hurricanes will look to build on a 6-3 win over Toronto in their last outing. Toronto opened the scoring with the lone goal of the opening period before Lucas Wallmark tied the game at one for Carolina just under six minutes into the 2nd. Nino Niederreiter and Will Foegele pushed the Hurricanes ahead 3-1 just :56 apart around the midway point of the 2nd period and Teuvo Teravainen pushed it to 4-1 just 2:28 later. Toronto pulled a goal back just :19 later and cut it to 4-3 by the end of the 2nd, but that’s as close as the Leafs got as Foegele buried his 2nd of the game in the first minute of the 3rd period and Martin Necas added a 6th for good measure just 2:51 after that. David Ayres got the win for Carolina as the game’s emergency goaltender after both James Reimer and Petr Mrazek went down due to injury. Ayres, who is the Zamboni driver for the Maple Leafs’ AHL affiliate ironically, got the win after stopping 8 of 10 shots faced in relief.

Head-to-head, Dallas is 7-3 in the last 10 meetings between these two teams.

Carolina getting the win behind the emergency goaltender is a nice story, but ultimately, the show must go on and now the Canes are missing their top two goaltenders for the next little while. That’s not good when taking on a Dallas team that’s been playing some pretty good hockey lately and hasn’t been all that bad on the road either. I just think this is a bad spot for the Hurricanes given the injuries, so I’ll take Dallas and the plus money here.