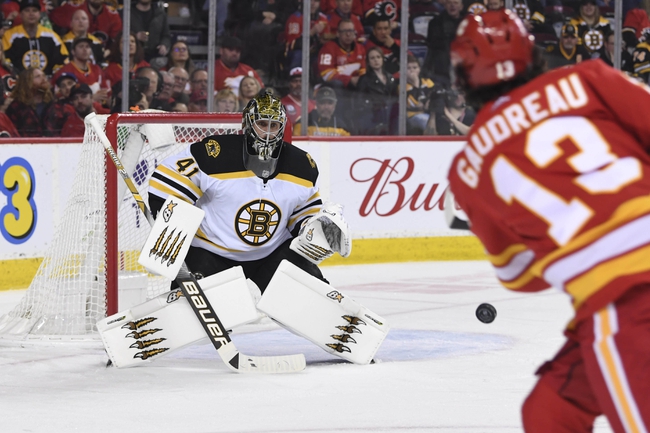 The Calgary Flames and the Boston Bruins meet in NHL action from the TD Garden on Tuesday night.

The Calgary Flames will look to build on a 4-2 win over the Detroit Red Wings in their last time outing. Johnny Gaudreau and Sean Monahan staked the Flames an early 2-0 lead with a pair of goals 1:17 apart before Detroit pulled a goal back with just over four minutes to go in the opening period. Anthony Mangiapane restored Calgary’s two goal lead in the dying seconds of the middle period but the Red Wings would make things interesting, cutting the deficit to 3-2 with two minutes to go in the game. Mangiapane would shut the door on any sort of comeback attempt with an empty-netter with just :12 to go in the game, sealing the deal for the Flames. David Rittich got the win to improve to 23-15-5 on the year after stopping 27 of 29 shots faced in the winning effort.

The Boston Bruins will look to rebound from a 9-3 beatdown at the hands of the Vancouver Canucks in their last outing. Vancouver opened the scoring just over four minutes into the game before David Pastrnak tied the game at one just 2:52 later. The Canucks would re-take the lead just over four minutes after that before going up 5-1 by the 2nd intermission. The Canucks made it 6-1 before Pastrnak potted his 2nd goal of the game later in the final frame. Chris Wagner cut it to 6-3 just 1:43 later, but that’s where Boston’s luck ran out as Vancouver potted another three goals on the way to the victory, sending Boston back empty-handed. Tuukka Rask took the loss, falling to 23-6-6 on the year after giving up 6 goals on 27 shots faced before being pulled from the game in the 3rd period.

I’ve gone back and forth on this game as the Bruins loss to Vancouver was an eye-opener, but every team is due for one of those games every now and again. Calgary holds some value with the heavy plus money, but the Flames have been playing win one, lose one hockey as of late, and the Bruins did just beat Calgary in their own building just four days ago. With this game being in Boston where the Bruins have been so good all season long, I think Boston on the puck line is the play as I see the Bruins winning this one 5-2.