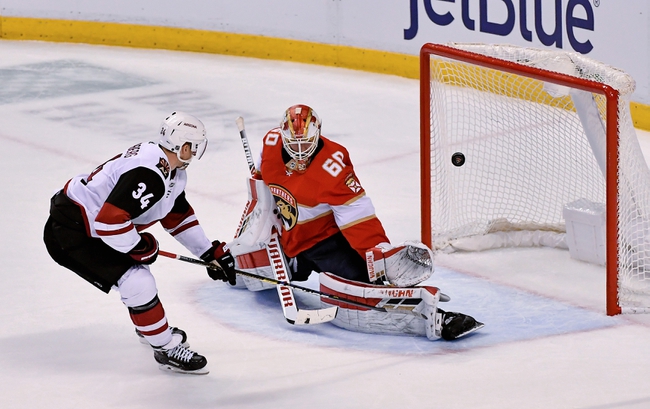 The Florida Panthers and the Arizona Coyotes meet in NHL action from the Gila River Arena on Tuesday night.

The Florida Panthers will look to bounce back from back-to-back losses after a 5-3 loss to Vegas last time out. Mike Hoffman opened the scoring for the Panthers just 3:28 into the game before Vegas tied the game at one with just over eight minutes to go in the opening period. Evgenii Dadonov gave Florida the lead within the first minute of the second period but the Golden Knights would storm ahead 3-2 by the end of the 2nd and 4-2 within the first :30 of the 3rd period. Aleksi Saarela pulled a goal back for the Panthers just under five minutes later, but that’s as close as Florida got as the Golden Knights iced the win with an empty-netter with just over a minute to go. Sam Montembault took the loss, falling to 5-4-1 on the year after giving up 4 goals on 38 shots faced in the losing effort.

The Arizona Coyotes will look to build on the 7-3 thrashing that they put on the Tampa Bay Lightning last time out. Tampa Bay took the lead less than four minutes into the game but Conor Garland and Clayton Keller tied the game and took the lead for the Coyotes just 1:10 apart later in the opening frame. Carl Soderberg pushed the lead to 3-1 six minutes into the 2nd before Tampa Bay tied things up at three with a pair of goals 1:26 apart. Brad Richardson restored Arizona’s lead just :53 after the Bolts tied the game at three, and the lead would hold as Keller and Garland each added their respective 2nd goals of the game in the 3rd and Derek Stepan would add a 7th Arizona goal for good measure. Antti Raanta got the win to improve to 14-14-3 on the year after stopping 27 of 30 shots faced in the winning effort.

Arizona’s win over the Lightning was definitely impressive, but I’m not sure that I’m prepared to say that the Coyotes are officially back on track yet. Florida’s had a couple of rough outings back-to-back, but the Panthers are in dire need of wins to keep pace in the wild card race and this is a more than winnable spot for the Panthers to take advantage of. I’ll take a shot with Florida and the plus money in this one.