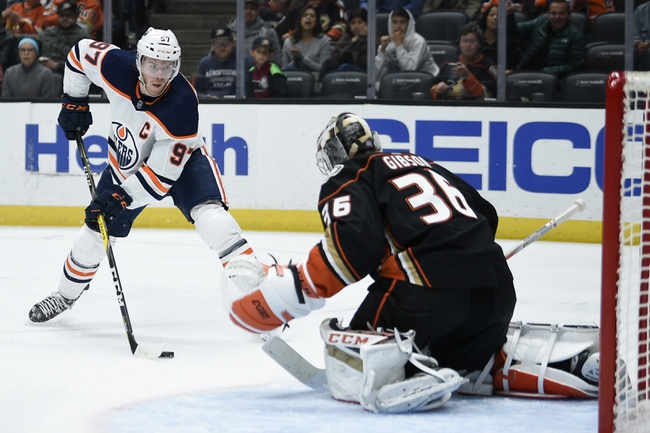 The Edmonton Oilers and the Anaheim Ducks meet in NHL action from the Honda Center on Tuesday night.

The Edmonton Oilers will look to build on a 4-2 win over the Los Angeles Kings in their last outing. Leon Draisaitl opened the scoring for the Oilers with the lone goal of the opening frame coming in the final minute of the period before Ryan Nugent-Hopkins made it 2-0 just over five minutes into the 2nd and Connor McDavid pushed the lead to 3-0 with just under four minutes to go in the 2nd. Los Angeles pulled a goal back just 2:25 later and made things interesting at 3-2 within the first minute of the 3rd period, but that’s as close as the Kings would get as Josh Archibald iced Edmonton’s win with an empty-netter in the last minute of regulation. Mike Smith got the win to improve to 17-10-5 on the year after stopping 21 of 23 shots faced in the winning effort.

The Anaheim Ducks will look to snap their four-game losing streak after a 6-5 overtime loss to the Vegas Golden Knights last time out. Vegas took the lead with just over seven minutes to go in the opening period before Devin Shore gave Anaheim a game-tying goal with just :02 to go in the 1st period. Nick Ritchie pushed the Ducks in front just after the midway point of the 2nd, but Vegas would tie the game and take the lead in a span of 3:12 later in the 2nd. Ritchie added his 2nd of the game just :21 into the 3rd but Vegas would push back out in front 5-3 just after the midway point of the 3rd. Adam Henrique would pull the Ducks back to even terms with a pair of goals 1:42 apart, forcing the game to go to OT where Vegas would pot the game-winner with just over a minute to go in the extra period. John Gibson took the OT loss, falling to 17-24-5 on the year after allowing all 6 goals on 28 shots faced in the losing effort.

I’ll give kudos to Anaheim for battling against Vegas and not just folding up and taking the loss, but the fact remains that the Ducks did lose that game, and are just back to giving us no value in an underdog role. Edmonton made some solid moves at the trade deadline, including adding Andreas Athanasiou from Detroit, a scorer that can do some damage for this team as many (including myself) can see AA being pair on the top line with Connor McDavid. I just think that Edmonton is going to be another team to pile onto Anaheim’s misery here, so I’ll side with Edmonton to get the job done in regulation to get a more favorable price on the Oilers here.