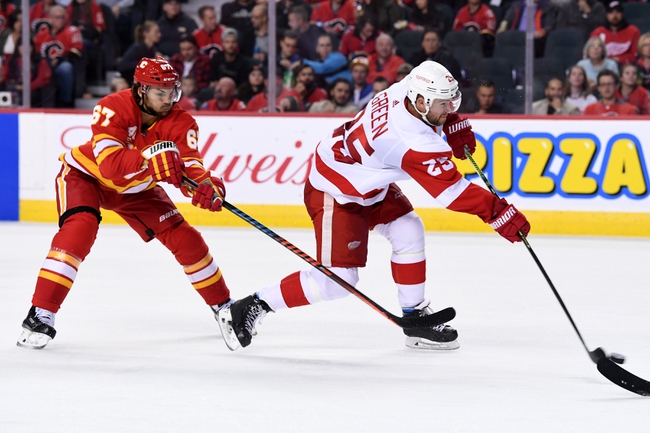 Where to Watch: Sportsnet, FS-Detroit+ Stream live sports and exclusive originals on ESPN+. Sign up now!

The Calgary Flames and the Detroit Red Wings meet in NHL action from Little Caesars Arena on Sunday night.

The Calgary Flames will be out to rebound from a 4-3 loss to Boston in their last outing. Mikael Backlund opened the scoring for the Flames just :20 into the game and doubled their lead and his goal tally just 2:14 later. Boston pulled a goal back just :24 later, but Johnny Gaudreau would restore the two-goal lead just :25 later. Boston would cut the deficit back to one just under three minutes later and would tie the game at three just after the midway point of the opening frame. Boston would take the lead less than a minute into the 2nd, and despite all the fireworks that happened in the opening 21 minutes of the game, the rest of the game fizzled out as neither side found the back of the net the rest of the way with Boston holding on for the win. Cam Talbot took the loss, falling to 9-10-1 on the year after stopping 19 of 23 shots faced in the losing effort.

The Detroit Red Wings will look to rebound from a 4-1 loss to the New York Islanders last time out. New York struck in each of the first two periods, carrying a 2-0 lead into the 3rd that would hold for most of the period before Anthony Mantha made things interesting, cutting the deficit to 2-1 with just under three minutes to go, but it ended up being not enough once again for Detroit as New York would score twice in :30 down the stretch to push the lead to 4-1, a lead that the Isles would take to the final buzzer, sending Detroit spiraling to yet another defeat. Jonathan Bernier took the loss, falling to 13-18-2 on the year after allowing 3 goals on 39 shots faced in the losing effort.

Normally I’m not trying to chase steep lines or puck line wagers on the road, and even more so when Calgary’s just 4-6 in their last 10 games. However, my stance on Detroit hasn’t changed, as the Red Wings continue to pile up the losses and continue to lose games against teams that are not named the Montreal Canadiens. I think this is a game that Calgary comes in and uses to shake off some rust and gets back to business when it comes to lighting the lamp, so I’ll take the Flames on the puck line here.