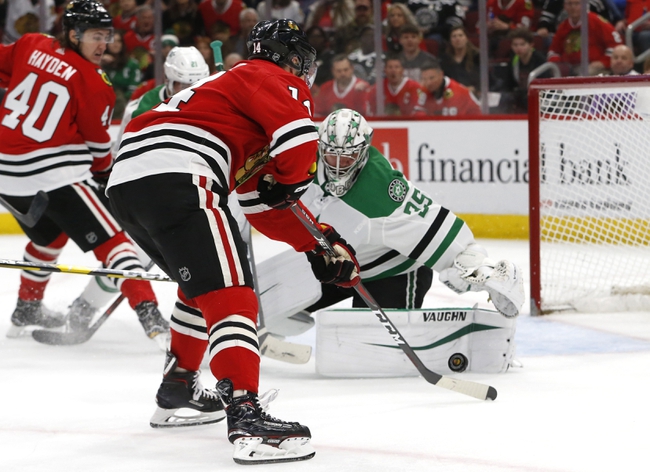 The Chicago Blackhawks and the Dallas Stars meet in NHL action from the American Airlines Center on Sunday afternoon.

The Chicago Blackhawks will look to build on a 2-1 win over Nashville last time out. The game was scoreless through the opening 20 minutes before Nashville took the lead with just over five minutes to go in the 2ndperiod. Alex DeBrincat would tie the game at one for the Blackhawks just before the midway point of the 3rd, and neither side would find the game-winner in regulation, so it was off to overtime where DeBrincat scored his 2nd goal of the game in the last minute of the extra period to secure the win and the extra point that goes along with it. Corey Crawford got the win to improve to 11-16-3 on the year after stopping 42 of 43 shots faced in the winning effort.

The Dallas Stars will try to bounce back from a 5-1 loss to St. Louis last time out. St. Louis opened the scoring with a pair of goals in the 1st before doubling the last to 4-0 with a pair of goals 2:21 apart. The Blues pushed the lead to 5-0 before Jamie Oleksiak got Dallas on the board with just 3:33 to play, but all It ended up being was a consolation goal as St. Louis held on for the win. Ben Bishop took the loss, falling to 21-13-4 after giving up 4 goals on 13 shots before being chased early in the 2nd period.

I’ve gone back and forth on this game, as Dallas has been playing the better hockey but Chicago needs the win more. With that said, the underdog’s had a ton of success here, winning 4 of the last 5 meetings and maybe the win over Nashville can help the Blackhawks get back on track. Dallas was bullied by St. Louis and I just think there’s a bit of a carry over here as well, so I’ll take a stab at Chicago and the plus money here.