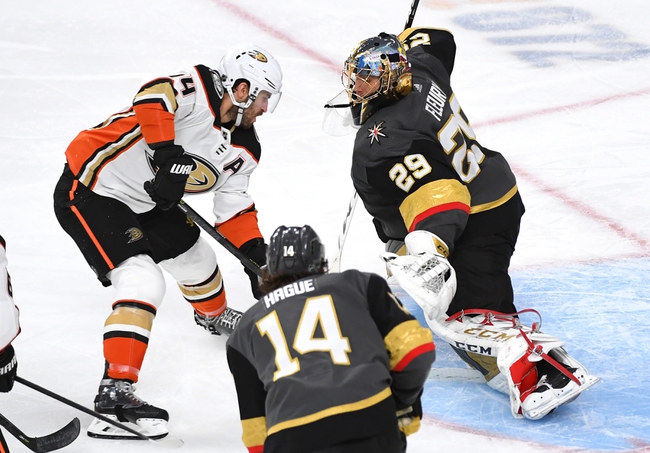 The Vegas Golden Knights and the Anaheim Ducks meet in a Pacific division matchup in NHL action from the Honda Center on Sunday night.

The Vegas Golden Knights will look to add to their current five-game winning streak after a 5-3 win over Florida last time out. Florida opened the scoring just over three minutes into the game before Tomas Nosek tied the game at one for the Golden Knights with just over eight minutes to go in the opening period. Florida re-took the lead in the opening minute of the 2nd before William Carrier tied the game and Max Pacioretty gave Vegas the lead by the end of the 2nd. Reilly Smith pushed the lead to 4-2 just :19 into the 3rd before Florida cut the deficit to 4-3 just under five minutes later. Florida outshot Vegas 19-6 in the 3rd, but the Panthers wouldn’t get any closer as Smith potted an empty-netter for his 2nd goal of the game to lock up the victory for Vegas. Marc-Andre Fleury got the win to improve to 25-14-5 on the year after stopping 32 of 35 shots faced in the winning effort.

The Anaheim Ducks will be out to snap a three-game losing streak after a hard-fought 1-0 loss to Colorado last time out. The game was scoreless through the opening period before Colorado broke through with just over three minutes to go in the 2nd period. Anaheim tried to force the issue in the 3rd, outshooting the Avs 11-5, but the Ducks just couldn’t find an equalizer as the Avalanche held on for a crucial road win. Rickard Rakell led Anaheim with 4 shots on goal in the losing effort. John Gibson took the loss in goal, falling to 17-24-4 on the year after allowing the lone goal on 29 shots faced in the losing effort.

The plus money with Anaheim is tempting given how the Ducks battled against the Avs, but the reality is that Anaheim is just in way over their heads here, as Vegas is red hot and rolling along while the Ducks are just counting down the days for the season to end. I think this is just another victim in Vegas’ way, and the Golden Knights aren’t a team I’m trying to step in front of right now. Give me Vegas on the puck line here to get some added value out of the wager.

Get Premium Picks Start Winning Now »
The pick in this article is the opinion of the writer, not a PickDawgz site consensus.
Previous Pick
Minnesota Wild vs. St. Louis Blues - 2/23/20 NHL Pick, Odds, and Prediction
Next Pick
NHL Power Rankings - All 31 Teams: 2/24/20