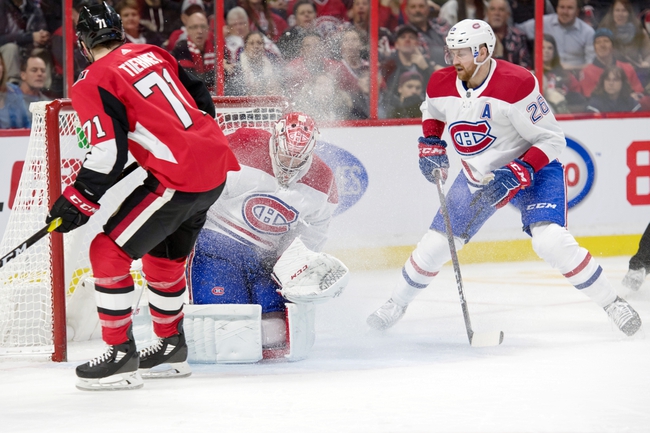 The Montreal Canadiens and the Ottawa Senators meet in NHL action from the Canadian Tire Centre on Saturday night.

The Montreal Canadiens will look to build on a 4-3 overtime win over Washington last time out. Washington opened the scoring just 7:29 into the game but Shea Weber would tie the game at one for the Canadiens with just over two minutes to go in the 1st. The Caps would retake the lead late in the 2nd, with just under three minutes to go in the period before Montreal tied the game at two thanks to Brendan Gallagher just 1:34 later. Ben Chiarot gave Montreal their first lead of the game just :30 into the 3rd, but the Capitals would tie the game at three with just :21 to go in the game. In overtime, Chiarot would score his 2nd of the game in the first minute of the extra period to give Montreal a much needed road win. Carey Price got the win, improving to 25-22-5 on the year after stopping 29 of 32 shots faced in the win.

The Ottawa Senators will look to rebound after a 5-1 loss to Winnipeg in their last outing. Nick Paul gave the Sens the lead with just over eight minutes to to in the 1st period, but Winnipeg would tie the game and take the lead in a span of 1:11 by the end of the opening period. The Jets went ahead 4-1 early in the 2nd with a pair of goals 1:02 apart and Winnipeg would ice the win with a power play goal  late in the 3rd period. Marcus Hogberg took the loss, falling to 3-7-7 on the year after allowing all 5 goals on 34 shots faced in the losing effort.

Normally I’d give Ottawa a look as a home dog because the Senators play their best at home and both teams are struggling. However, Ottawa is now struggling at home too, and the Sens just aren’t giving us any value regardless of where they’re playing. Montreal’s playoff hopes are on life support, but the Habs need to win games like these if they’re going to have any hope over the last month of the season. I’ll lay the juice with Montreal in what’s a lean at best.