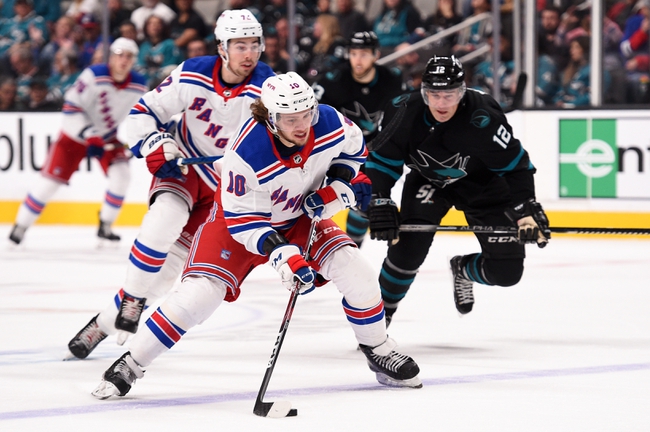 The San Jose Sharks and the New York Rangers meet in NHL action from Madison Square Garden on Saturday night.

The San Jose Sharks will look to rebound from back-to-back losses after a 2-1 loss to New Jersey in their last outing. San Jose opened the scoring with the lone goal of the opening period coming off of the twig of Tim Heed, but New Jersey would tie the game at one late in the 2nd period. The Devils would take a 2-1 lead just before the three-minute mark of the 3rd period and despite the Sharks outshooting the Devils 11-8 in the 3rd, San Jose wouldn’t find a game tying goal as the Devils would hold on to the final horn for the win, sending San Jose back empty-handed. Martin Jones took the loss, falling to 14-18-2 on the year after giving up a pair of goals on 25 shots faced in the losing effort.

The New York Rangers will look to build on back-to-back wins after a 5-2 win over Carolina last time out. Mika Zibanejad opened the scoring with the lone goal of the opening period but Carolina would tie the game at one just after the three-minute mark of the 2nd period. Jesper Fast would restore New York’s lead just before the midway point of the 2nd and Brady Skjei would push the lead to 3-1 late in the 2nd followed by Artemi Panarin’s marker 1:10 into the 3rd period to make it 4-1. The Hurricanes pulled a goal back just over four minutes later, but that’s as close as they’d get as New York added an empty-netter from Ryan Strome to seal the deal and lock up the win. Igor Shesterkin got the win to improve to 8-1-0 on the year after stopping 27 of 29 shots faced in the winning effort.

This is a decent amount of plus money, but the Rangers are playing arguably some of their best hockey of the season right now and the goaltending has been a major part of it, as the Rangers are just five points out of a wild card spot. The Sharks aren’t going anywhere come playoff time, and I think the Rangers have a legitimate chance but New York also has to take advantage of winnable spots like these. Add on the amount of success that the Rangers have had on the second half of a back-to-back, and I think you have to go with the Rangers here and to get the price down, I’ll take the Rangers in regulation.