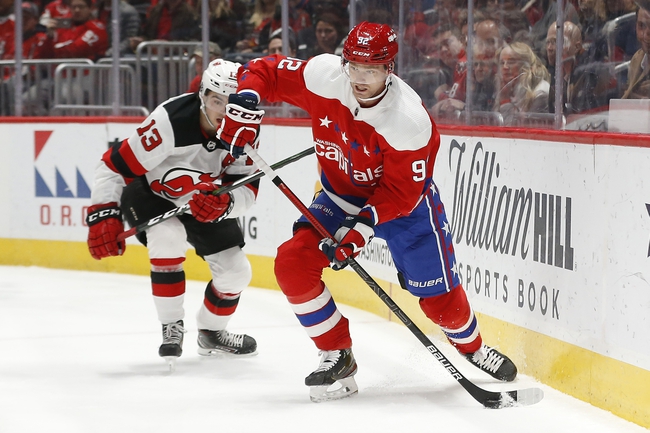 Where to Watch: NBCS-Washington, MSG+ Stream live sports and exclusive originals on ESPN+. Sign up now!

The Washington Capitals and the New Jersey Devils meet in NHL action from the Prudential Center on Saturday afternoon.

The Washington Capitals will look to rebound from a three-game losing streak after a 4-3 loss to the Montreal Canadiens in their last outing. Alex Ovechkin opened the scoring for the Caps just over seven minutes into the game but Montreal would tie the game at one with just over two minutes to go in the opening period. Lars Eller would give Washington the lead late in the 2nd, but Montreal tied the game again just 1:34 later. The Habs took the lead just :30 into the 3rd period, and Washington looked doomed but Tom Wilson would tie the game at three with just :21 to go in the 3rd period to send the game to OT. The extra frame didn’t last long though, as Montreal capitalized on the first chance in OT, burying the game winner less than a minute into the extra period. Braden Holtby took the loss, falling to 21-13-6 on the year after allowing 4 goals on 32 shots faced in the losing effort.

The New Jersey Devils will look to build on a 2-1 win over the San Jose Sharks that was picked up last time out. San Jose took the lead just over seven minutes into the game with the lone goal of the opening period before Jesper Bratt tied the game at one with just under four minutes to go in the 2nd period. P.K. Subban would give the Devils the lead just under three minutes into the 3rd, and despite being outshot 11-8 in the 3rdand 37-25 in the game, the Devils would hold on for the victory the rest of the way. MacKenzie Blackwood got the win to improve to 20-12-7 on the year after stopping 36 of 37 shots faced in the winning effort.

The plus money makes a lot of sense with the little slump that the Caps have been on, and New Jersey’s really picked up their play despite being near the back of the pack in the playoff race. However, there’s not many teams that could be a better slump buster for Washington than the New Jersey Devils, as the Caps have won 20 of the last 26 against New Jersey and 9 of the last 11 at the Prudential Center, including a 6-3 decision back in December. I also think this is the game where we see goal #700 for Alex Ovechkin, so I’ll think that the Caps will want to win that game in style. Give me Washington and the puck line for some added value in this one.