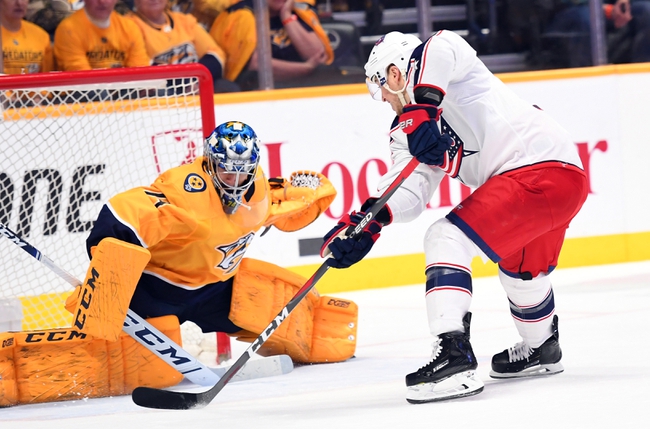 The Columbus Blue Jackets and the Nashville Predators meet in NHL action from the Bridgestone Arena on Saturday night.

The Columbus Blue Jackets will be out to snap a seven-game losing streak after a 4-3 loss to Philadelphia last time out. Oliver Bjorkstrand opened the scoring just :41 into the game before Nick Foligno doubled the lead just after the nine-minute mark of the 1st. Philly pulled a goal back just :23 later and the 2-1 score would hold going into the 2nd period. Stefan Matteau would restore the two-goal cushion just before the four-minute mark of the 2nd period but the Flyers would tie the game later in the 2nd with a pair of goals 1:26 apart. The rest of the 2nd and the entire 3rd period wouldn’t produce a winner, so it was off to overtime where the Flyers would the overtime winner with just over a minute to go in the extra frame, sending the Blue Jackets to yet another loss. Elvis Merzlikins took the loss, falling to 12-9-7 on the year after stopping 29 of 33 shots faced in the losing effort.

The Nashville Predators will look to rebound from back-to-back losses after a 2-1 overtime loss to Chicago last time out. The game was scoreless through the opening 20 minutes and through most of the 2nd before Mattias Ekholm gave Nashville the lead with just over five minutes to go in the 2nd period. Chicago would tie the game at one just before the midway point of the 3rd period, and the rest of the 3rd wouldn’t see any action from that point on, so it was off to some free hockey where Chicago capitalized on an odd man rush to pot the winner and send Nashville back with just a single point to show for their efforts. Pekka Rinne took the loss, falling to 1813-4 on the year after st stopping 36 of 38 shots faced in the losing effort.

The Blue Jackets haven’t been half bad on the road, but I need to see signs of life from Columbus before taking a shot on them, even with decent sized plus money. Nashville has just been the more consistent of the two sides as of late and I think this just boils down to fading a Columbus team that’s on a seven game losing streak, simple as that. I’ll lay the juice with Nashville at home by default.