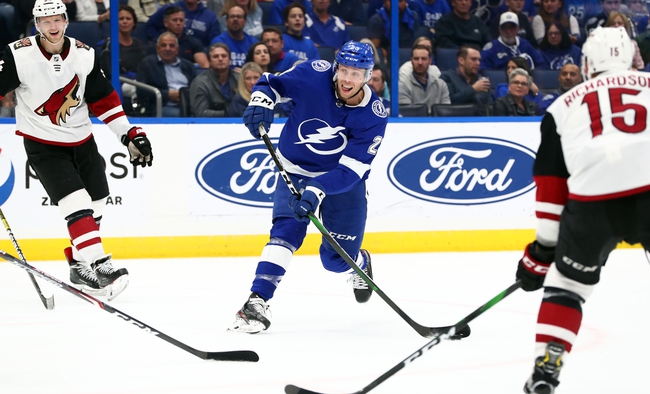 Where to Watch: FS-Arizona+, SunSports Stream live sports and exclusive originals on ESPN+. Sign up now!

The Tampa Bay Lightning and the Arizona Coyotes meet in NHL action from the Gila River Arena on Saturday night.

The Tampa Bay Lightning will look to rebound after having their 11-game winning streak snapped with a 5-3 loss to Vegas last time out. Kevin Shattenkirk gave the Bolts the lead just over seven minutes into the game before Vegas tied the game at one with just under two minutes to go in the opening frame. Vegas took the lead early on in the 2nd before Steven Stamkos tied the game at two with just over four minutes to go in the 2nd. Vegas restored the lead just 1:01 later and went ahead 5-2 within the first :47 of the 3rd with a pair of goals :37 apart. Stamkos added his 2nd goal of the game with two minutes to go, but it wasn’t enough as Vegas held on for the win and snapped Tampa’s winning streak. Andrei Vasilevskiy took the loss, falling to 32-10-3 on the year after allowing all 5 goals on 33 shots faced in the losing effort.

The Arizona Coyotes will look to rebound from back-to-back losses after a narrow 1-0 loss to the St. Louis Blues last time out. The game was scoreless through the first two periods and the first half of the 3rd before St. Louis took the lead with just eight minutes to go in the game. The Coyotes allowing just a single goal was a miracle considering that the Coyotes were bombarded with 46 shots on goal from the Blues while mustering up a puny 14 shots on goal of their own, including being outshot 37-6 over the final two periods and 18-2 in the 3rd. Antti Raanta was a hard luck loser, taking the loss to fal to 13-14-3 after stopping 45 of 46 shots faced in the losing effort.

The plus money with Arizona is intriguing, but the problem for the Coyotes is that they just get in their own way and find ways to lose hockey games lately, as the defense doesn’t show up, and when the D does hold up their end like it did against the Blues, the Coyotes get shut out. Inconsistencies like that won’t work against Tampa Bay, as the Bolts will be eager to start a new winning streak and are just playing as well as any team in the league right now. I’ll side with Tampa Bay in regulation to get the price down here.