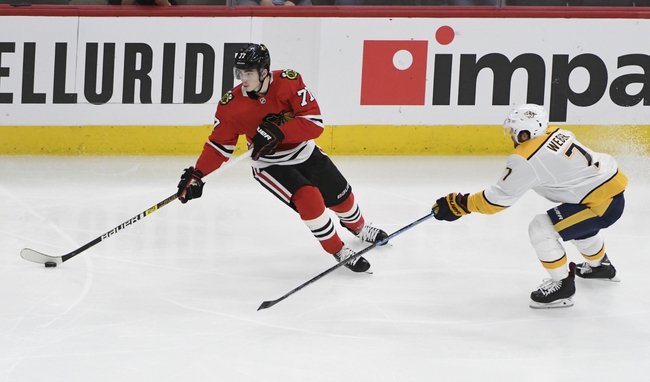 Where to Watch: NBCS-Chicago, FS-Tennessee Stream live sports and exclusive originals on ESPN+. Sign up now!

The Nashville Predators and the Chicago Blackhawks meet in NHL action from the United Center on Friday night.

The Nashville Predators will look to rebound from a 4-1 loss to the Carolina Hurricanes last time out. Carolina took the lead just over three minutes into the game with the lone goal of the opening period before Nashville tied the game at one thanks to Ryan Johansen’s marker in the opening minute of the 2nd period. Carolina restored the lead just under three minutes later and doubled the lead just after the eight-minute mark of the 2ndperiod before the Hurricanes added a 4th goal to take an insurmountable 4-1 lead that the Predators wouldn’t be able to chip into the rest of the way. Juuse Saros got the loss, falling to 11-10-4 on the year after allowing all 4 goals on 30 shots faced in the losing effort.

The Chicago Blackhawks will look to rebound from back-to-back losses after a 6-3 defeat to the New York Rangers last time out. The Rangers took the lead just under two minutes into the game and the lead would hold going into the 2nd where Dominik Kubalik tied the game at one for the Blackhawks with the lone goal of the 2nd period. New York surged ahead 3-1 with a pair of goals 1:28 apart before Kubalik scored his 2nd of the game to cut the deficit back to 3-2 just after the six-minute mark of the 3rd. New York pushed ahead 5-2 with a pair of goals :53 apart but Drake Caggiula would keep Chicaog in it, making it 5-3 with just over eight minutes to go, but the Rangers would respond just under two minutes later to lock up the win and send the Blackhawks back empty-handed as Chicago wouldn’t get any closer the rest of the way. Robin Lehner took the loss, falling to 16-10-5 on the year after giving up all 6 goals on 41 shots faced in the losing effort.

I’m not sure how ready I am to say that the Predators are back on track, but the Predators are playing heads and shoulders better hockey than Chicago right now. It wasn’t too long ago that the Blackhawks looked serious about making a playoff push, but Chicago just looks like they’re running out of gas at the wrong time. Add in the recent success that Nashville’s had against Chicago and I think you have to lay the juice with Nashville on the road here.