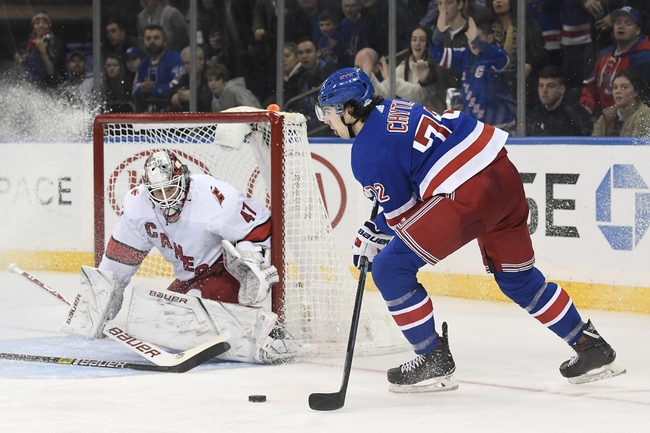 Where to Watch: MSG2, FS-Carolina Stream live sports and exclusive originals on ESPN+. Sign up now!

The New York Rangers and the Carolina Hurricanes meet in NHL action from the PNC Arena on Friday night.

The New York Rangers come into this game looking to build on a 6-3 win over the Chicago Blackhawks in their last outing. Filip Chytil opened the scoring just under two minutes into the game and the lead would hold up through the rest of the 1st before Chicago tied the game at one in the 2nd period. Pavel Buchnevich and Ryan Strome pushed the Rangers ahead 3-1 early in the 3rd with a pair of goals 1:28 apart before Chicago cut the deficit back to 3-2 just over two minutes later. Chris Kreider and Artemi Panarin pushed New York’s lead to 5-2 with goals :53 apart just before the midway point of the 3rd but Chicago would again respond just under two minutes later, not going away. Mika Zibanejad put the dagger in just 1:58 later to lock up the win as the Rangers would ride the three-goal cushion to the finish line. Igor Shesterkin got the win to improve to 7-1-0 on the year after stopping 37 of 40 shots faced in the winning effort.

The Carolina Hurricanes will look to build on a 4-1 win over Nashville last time out. Jordan Staal opened the scoring for the Hurricanes just over three minutes into the game before Nashville tied the game at one in the opening minute of the 2nd period. Andrei Svechnikov restored Carolina’s lead just under three minutes later before Nino Niederreiter made it 3-1 just over four minutes later. Sebastian Aho made it a 4-1 gave just under five minutes into the 3rd, and that was all she wrote as the Preds wouldn’t get any closer the rest of the way. Petr Mrazek got the win to improve to 20-15-2 on the year after stopping 28 of 29 shots faced in the winning effort.

I get the Hurricanes being favored at home, but this price tag is showing absolutely no respect to how the Rangers have been playing lately. New York has stepped up their play, winning each of their last 6 away from MSG and the head-to-head trends favor New York in this spot in a big way. I’ll take a shot with New York and the plus money here.