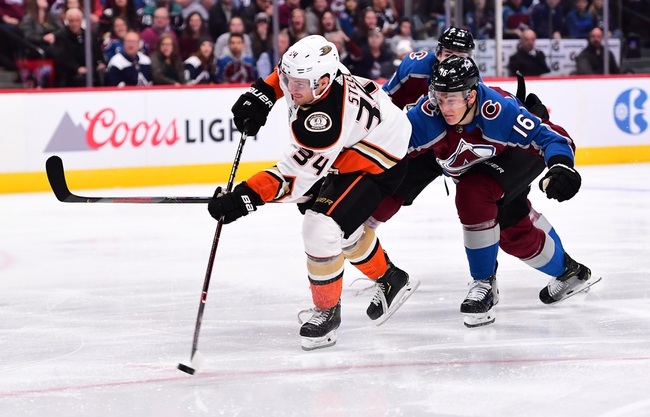 The Colorado Avalanche and the Anaheim Ducks meet in NHL action from the Honda Center on Friday night.

The Colorado Avalanche will look to build on a 3-1 win over the New York Islanders last time out. Joonas Donskoi opened the scoring just over nine minutes into the game before Andre Burakovsky doubled Colorado’s lead in the opening minute of the 2nd period. Gabriel Landeskog pushed the lead to 3-0 just before the eight-minute mark of the 3rd period. New York pulled a goal back late in the 3rd, but despite the Isles outshooting Colorado 10-3 in the 3rd period, the Avs would hold on for the win at the final horn. Pavel Francouz got the win, improving to 14-5-3 on the year after stopping 27 of 28 shots faced in the winning effort.

The Anaheim Ducks will look to rebound from back-to-back losses after a 4-1 loss to Florida last time out. Max Jones opened the scoring for the Ducks with just under four minutes to go in the opening period but Florida would tie the game in the dying second of the opening period. The Panthers would sure ahead 3-1 with a pair of goals 3:36 apart just past the midway point of the 2nd period and would ice the game with a 4th goal on an empty net late in the 3rd period. John Gibson ended up with the loss in goal, falling to 17-23-4 on the year after allowing 3 goals on 31 shots faced in the losing effort.

Plus money with Anaheim is tempting given how much success the Ducks have had in this matchup. However, a lot of those wins came when the Ducks were a much better team if we’re being honest, and I just don’t think that Anaheim has what it takes to be able to keep pace with Colorado here. The Avs are starting to get their mojo back and should be able to get the job done here. I’ll side with Colorado in regulation to get the price down.