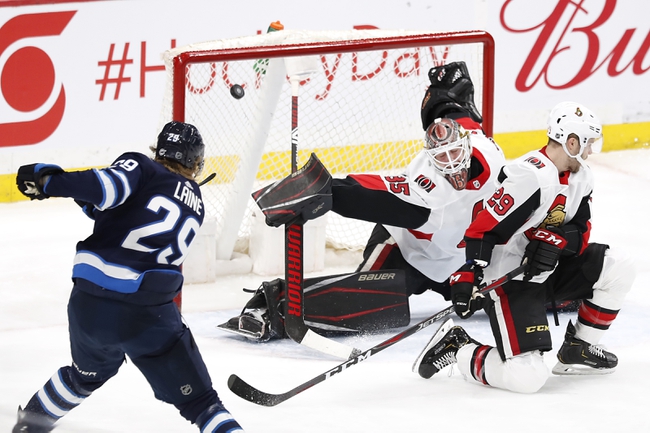 The Winnipeg Jets and the Ottawa Senators meet in NHL action from the Canadian Tire Center on Thursday night.

The Winnipeg Jets will look to build on a 6-3 win over the Los Angeles Kings last time out. Los Angeles opened the scoring just :35 into the game, and the lead would hold up through the rest of the 1st period and a large part of the 2nd before Jansen Harkins got the Jets on the board with just under seven minutes to go in the 2nd. Mason Appleton and Blake Wheeler pushed the Jets ahead 3-1 with a pair of goals 1:28 apart before the Kings pulled a goal back early in the 2nd. Nikolaj Ehlers responded just 4:28 later, but the Kings would cut the deficit to 4-3 with just under five minutes to go. That’s as close as the Kings got though, as Patrik Laine added an empty-netter with just over two minutes to go to make it 5-3 and Wheeler would add his 2nd goal of the game for a 6th goal for good measure. Connor Hellebuyck got the win to improve to 26-18-5 on the year after stopping 31 of 34 shots faced in the winning effort.

The Ottawa Senators will look to build on back-to-back wins after a 7-4 win over Buffalo last time out. Buffalo scored just 2:14 into the game to take the lead and doubled their lead just past the midway point of the 1stbefore Vladislav Namestnikov got the Senators on the board with just under six minutes to go in the 1st. Artem Anisimov would score just 1:05 after that to tie the game following by Drake Batherson’s marker just :09 after that to give Ottawa the lead. Anisimov potted his 2nd of the game just 2:15 later to give Ottawa a 4-2 lead after 20 minutes of play. Buffalo pulled a goal back early in the 2nd before Jean-Gabriel Pageau responded at the nine-minute mark of the 2nd. Buffalo would again respond later in the 2nd before Pageau added his 2nd of the game with just over seven minutes to go in the game and Anthony Duclair iced the win with less than a minute to play in the game on an empty net. Craig Anderson got the win to improve to 9-13-2 on the year after stopping 23 of 27 shots faced in the winning effort.

I get Winnipeg being favored here and I’ve dumped on the Senators quite a bit lately. However, Winnipeg still has some unsolved issues on the road, and the Senators have found their scoring mitts at home as of late. This isn’t a game I’m looking to bet, but if forced to pick, the plus money with Ottawa looks like it holds a bit of value here.