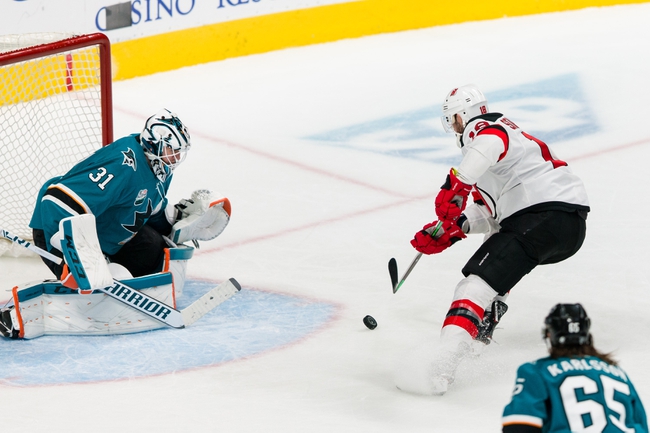 The San Jose Sharks and the New Jersey Devils meet in NHL action from the Prudential Center on Thursday night.

The San Jose Sharks will look to rebound from a 5-3 loss to Florida in their last outing. Florida took the lead just under five minutes into the opening frame before San Jose tied the game at one just after the midway point of the opening frame. Florida took the lead with the lone goal of the 2nd period before pushing the lead to 3-1 just after the halfway point of the 3rd. Kevin Labanc would cut the deficit to 3-2 before Florida responded just 2:32 later. Timo Meier replied just 1:14 later but Florida would lock up the win with an empty net goal with just :05 to go. Aaron Dell took the loss, falling to 12-12-2 on the year after allowing 4 goals on 27 shots faced in the losing effort.

The New Jersey Devils will look to rebound from a 3-0 loss to the St. Louis Blues in their last outing. The game was scoreless through the opening 20 minutes before St. Louis took the lead just before the midway point of the 2nd period. The Blues would strike twice more in the 3rd to take an insurmountable 3-0 lead as none of New Jersey’s 17 shots on goal would find the back of the net in the losing effort. Wayne Simmonds led the Devils with 3 shots on goal in the loss. Louis Domingue ended up with the defeat, falling to 3-8-2 on the year after giving up 3 goals on 39 shots faced in the losing effort.

I’m not sure I’m trying to bet this one as neither team is really going to be making a playoff push down the stretch, but for the sake of a pick, as much as I’ve said I’m done with trying to figure out the Sharks, San Jose has won their last 4 road games and have had a lot of success against the Devils in the past. Plus We’re getting plus money so that’s kind of nice too. I’ll take my shot with San Jose and the plus money in this one.