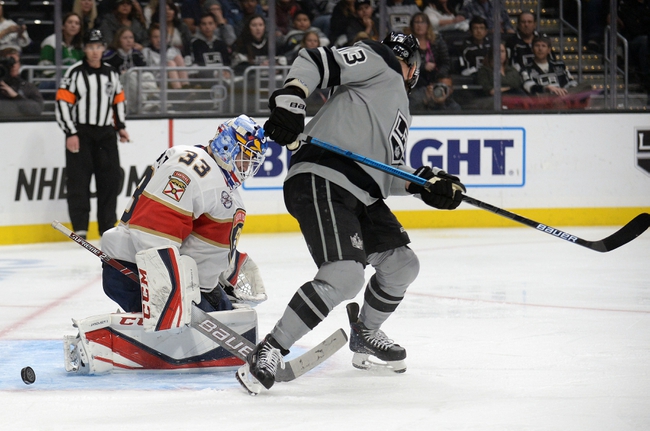 Where to Watch: FS-Florida, FS-West Stream live sports and exclusive originals on ESPN+. Sign up now!

The Florida Panthers and the Los Angeles Kings meet in NHL action from the Staples Center on Thursday night.

The Florida Panthers will look to build on back-to-back wins after a 4-1 win over Anaheim last time out. Anaheim opened the scoring with just under four minutes to go in the opening period before Aleksander Barkov tied the game at one with just :05 to go in the period. Vincent Trocheck gave Florida the lead just after the midway point of the 2nd period before Aleksi Saarela pushed the lead to 3-1 just 3:36 later. The 3-1 score would hold up going into the 3rd where MacKenzie Weegar added an insurance marker on an empty net with just over two minutes to play to secure the win for the Panthers. Sergei Bobrovsky got the win to improve to 22-17-6 on the year after stopping 35 of 36 shots faced in the winning effort.

The Los Angeles Kings will look to rebound from a 6-3 loss to the Winnipeg Jets in their last outing. Dustin Brown opened the scoring just :35 into the game and the lead would hold through the 1st and a good chunk of the 2nd before Winnipeg tied the game with just under seven minutes to go in the 2nd period. Winnipeg took a 3-1 lead later in the 2nd with a pair of goals 1:28 apart but Martin Frk pulled a goal back for L.A. 1:21 into the 3rd period. The Jets would respond just over four minutes later before Brown added another goal with just under five minutes to go. Winnipeg would lock up the win with a pair of goals :48 apart late in the 3rd to lock up the victory. Calvin Petersen got the loss, falling to 1-2-0 on the year after allowing 5 goals on 34 shots faced in the losing effort.

On a lot of nights I wouldn’t be try to lay juice with a team on the road on the second half of a back-to-back. However, Los Angeles is going through a fire sale throughout their whole team right now, trading away a couple of key pieces like Alec Martinez and Tyler Toffoli and it’s become evidently clear that the Kings are mailing in this season. Florida beat up on Anaheim last time out, and we saw how much firepower the offense has against lesser teams and I expect to see more of the same here, so I’ll lay the juice with Florida here.