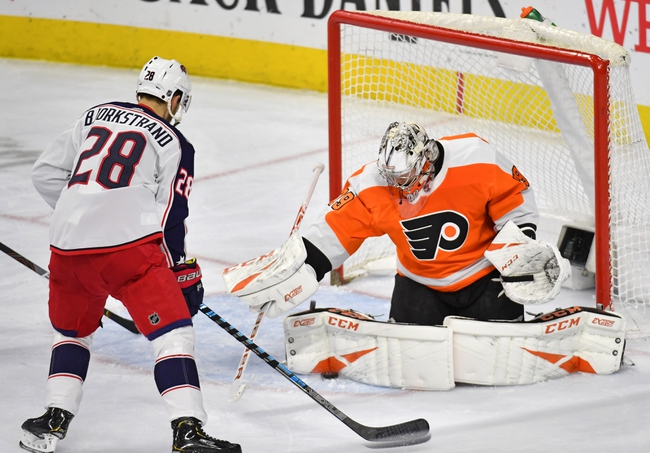 The Philadelphia Flyers and the Columbus Blue Jackets meet in the second half of a home-and-home set in NHL action from the Nationwide Arena on Thursday night.

Philadelphia jumped out to an early 2-0 lead with a pair of goals from Kevin Hays and Sean Couturier 1:02 apart within the first 4:30 of the game. Philadelphia’s lead would hold up through the rest of the 1st and a good chunk of the 2nd before Philippe Myers pushed Philly’s lead to 3-0 just past the midway point of the 2nd period. Oliver Bjorkstrand god Columbus on the board with just under three minutes to play in the 2nd, but the Flyers would shut down any comeback attempt as Travis Konecny restored the three-goal cushion less than four mintues into the 3rd period and added a 5th goal for good measure off of the stick of Jakub Voracek just past the midway point of the 3rd.

Carter Hart got the win between the pipes for the Flyers, sitting at 18-12-3 on the year after stopping 28 of 29 shots faced in the winning effort while Elvis Merzlikins took the loss in goal for Columbus, falling to 12-9-6 on the year after allowing 4 goals on 12 shots before being pulled in the 3rd period.

I get Columbus being favored at home, but the problem I have with it is that I’m not trying to lay juice with a team that’s lost 6 straight even if Columbus is better than that and due for a win. Philadelphia isn’t the same team on the road that they are at home, but the Flyers are playing better hockey right now, and getting them at even money is a steal. I’ll side with the Flyers here.