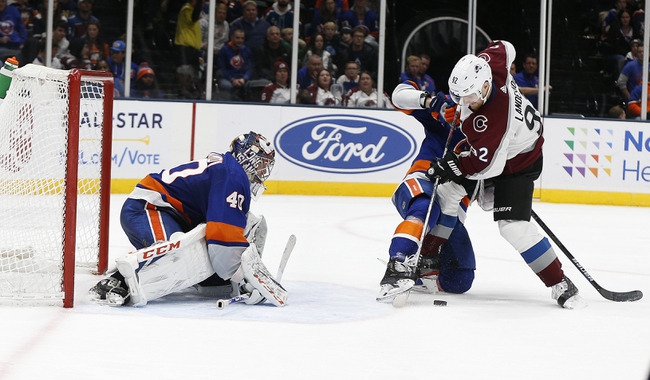 Where to Watch: Altitude, MSG+ Stream live sports and exclusive originals on ESPN+. Sign up now!

The New York Islanders and the Colorado Avalanche meet in NHL action from the Pepsi Center on Wednesday night.

The New York Islanders will be out to snap a three-game losing streak after a 2-1 loss to Arizona in their last outing. Arizona took the lead just under the five minute mark of the opening period, and the lead would hold through the rest of the 1st and all of the 2nd before Arizona doubled their lead just under four minutes into the 3rd. Anthony Beauvillier pulled a goal back just 2:49 later for the Isles, but it wasn’t enough as the Coyotes would ride the lead to the final horn and send the Islanders back empty-handed. Semyon Varlamov took the loss, falling to 17-11-4 on the year after stopping 30 of 32 shots faced in the losing effort.

The Colorado Avalanche will also be out to snap a three-game losing streak after a 4-3 overtime loss to the Tampa Bay Lightning in their last outing. Andre Burakovsky opened the scoring for the Avs just under five minutes into the game, and the lead would hold until the 2nd where Tampa Bay took the lead with a pair of goals :16 apart and would forge ahead 3-1 with just over six minutes to go in the 2nd period. Nathan MacKinnon would pull a goal back late in the 2nd and Valeri Nichushkin would tie the game at three with just over seven minutes to go, eventually forcing overtime at the final horn. Tampa Bay would bury the winner just over three minutes into the extra period, sending Colorado to another loss. Pavel Francouz took the loss, falling to 13-5-2 on the year after allowing 4 goals on 27 shots faced in the losing effort.

This is a tough one to call, as both teams are playing below what we’d expect them to, and I just think this is a thick line when both teams have been virtually playing the same hockey as of late, and the Islanders away record is even with Colorado’s home mark. This game just feels closer to a coin flip in my opinion, so I’ll take a shot with the Islanders based on value, but ultimately I’m staying away from this one.