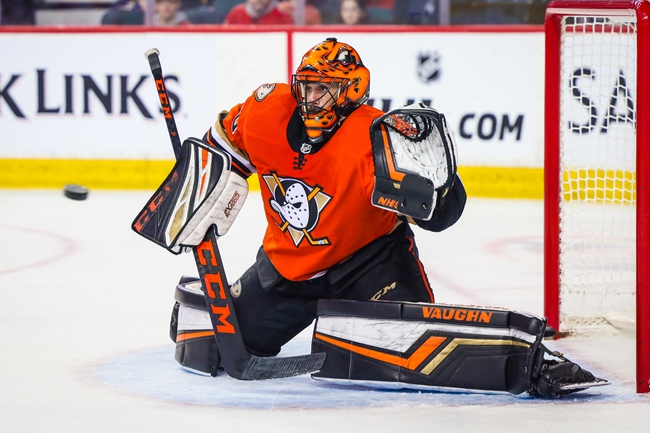 The Florida Panthers and the Anaheim Ducks meet in NHL action from the Honda Center on Wednesday night.

The Florida Panthers come into this game looking to build on a 5-3 win over the San Jose Sharks in their last outing. Evgenii Dadonov gave the Panthers the lead just under five minutes into the opening frame before San Jose tied the game at one just after the midway point of the 1st. Mike Hoffman gave the Panthers a 2-1 lead with the lone goal of the 2nd period coming with nine minutes to go in the 2nd period, followed by a Colton Sceviour goal just past the midway point of the 3rd period to forge ahead 3-1. San Jose pulled a goal back with just over five minutes to go before Anton Stralman restored the two-goal cushion with just under three minutes to go. The Sharks made it interesting at 4-3 just 1:14 later but the Panthers would ice the win with an empty-netter with just :05 to go in the game. Sergei Bobrovsky got the win to improve to 21-17-6 on the year after stopping 29 of 32 shots faced in the winning effort.

The Anaheim Ducks will look to bounce back after a 6-4 loss to the Calgary Flames last time out. The game was scoreless through the opening 20 minutes before Adam Henrique gave Anaheim the lead just under six minutes into the 2nd period. The Flames would tie the game at one just :53 later before Jakob Silfverberg gave Anaheim the lead back just after the midway point of the 2nd period. Nicolas Deslauriers pushed the lead to 3-1 just over three minutes into the 3rd but the Flames would tie the game with a pair of goals :19 apart just two minutes later and would forge ahead 5-3 with a pair of goals 1:04 apart. The Flames would appear to ice things with an empty-netter in the last minute of the 3rd period but Devin Shore would add a consolation goal in the dying seconds which wouldn’t be enough as it was too little too late. Ryan Miller took the loss, falling to 7-6-3 on the year after allowing 5 goals on 42 shots faced in the losing effort.

Plus money with a home dog like Anaheim is usually tempting, but the issue here is that the Ducks continue to provide little to no value as a dog, and while Florida’s had some hiccups, the Panthers are the better team playing better hockey side by side here. The Panthers also have an ability to crank out offense with the best of the best in the NHL, and that’s not good for Anaheim coming fresh off of that collapse against Calgary. I’ll lay the juice with the Panthers on the road here as I want nothing to do with Anaheim in their current form.