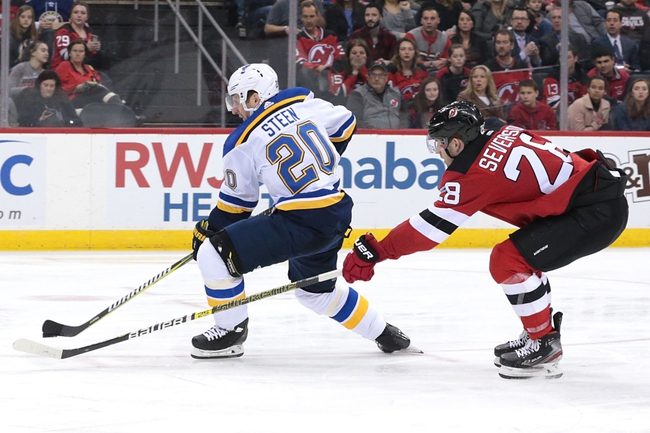 Where to Watch: FS-Midwest, MSG+ Stream live sports and exclusive originals on ESPN+. Sign up now!

The New Jersey Devils and the St. Louis Blues meet in NHL action from the Enterprise Center on Tuesday night.

The New Jersey Devils will look to build on a 4-3 shootout win over Columbus in their last outing. Columbus jumped out to an early 2-0 lead within the first 6:20 of the game before Joey Anderson and Nick Merkley scored 2:31 apart early in the 2nd period. Kyle Palmieri gave the Devils the lead with just over eight minutes to go in the middle period, but the Blue Jackets would tie the game at three just before the nine minute mark of the final frame. The rest of the 3rd period didn’t produce a winner, and neither did overtime, so it was off to the shootout where Jesper Bratt scored in round 7 of the shootout to give the Devils the win and the extra point that goes along with it. MacKenzie Blackwood got the win, improving to 19-12-7 on the year after stopping 52 of 55 shots faced in the winning effort.

The St. Louis Blues will be out to snap a five-game losing streak after being swept in a home-and-home by Nashville following a 2-1 loss in Sunday’s finale. The game was scoreless through the opening 20 minutes before Nashville got on the board just before the eight minute mark of the 2nd period. Tyler Bozak tied the game at one for the Blues just 3:03 later, and the tie would hold up through the 2nd and most of the 3rd but despite outshooting Nashville in all 3 periods, including 14-12 in the 3rd, Nashville would find the eventual game-winner with just over two mintues to play. Jordan Binnington took the loss, falling to 24-11-7 on the year after giving up both goals on 24 shots faced in the losing effort.

Normally, 95-99% of the time I’m not trying to lay this kind of juice or even back a team on a five-game losing streak the way St. Louis is right now. However, the Blues are too good of a team to keep playing like this for an extended period of time, especially with the late-season playoff push just around the corner. I just think that the Devils are playing a bit over their heads as of late and this feels like a spot where the Blues just put their proverbial foot down and say enough is enough. I’ll take St. Louis on the puck line as I see this being a beatdown.