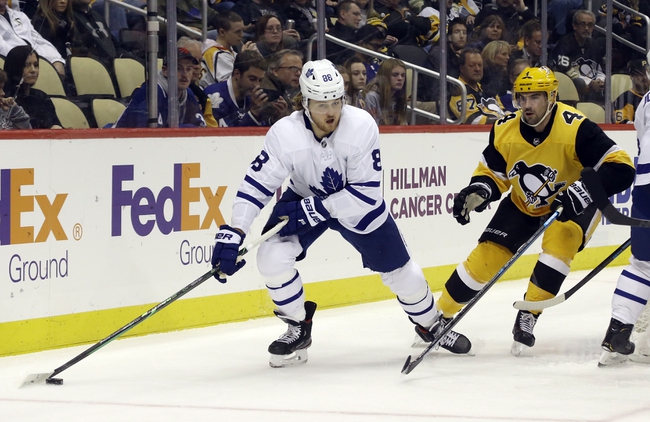 The Toronto Maple Leafs and the Pittsburgh Penguins meet in NHL action from the PPG Paints Arena on Tuesday night.

The Toronto Maple Leafs will look to rebound from a 5-2 loss to Buffalo last time out. The game was scoreless through the opening 20 minutes before Buffalo opened the scoring just 1:32 into the 2nd. The Sabres took a 2-0 lead just before the midway point of the 2nd period before Toronto got on the board thanks to Egor Korshkov’s first goal just 1:47 later. Zach Hyman tied the game at two just over two minutes into the 3rd, but Buffalo would storm ahead with a flurry of 3 goals in a span of 1:29 to take the 5-2 lead that they would ride to the finish line. Frederik Andersen took the loss, falling to 24-11-6 on the year after stopping 31 of 36 shots faced in the losing effort.

The Pittsburgh Penguins will look to build on back-to-back wins after a 5-1 win over Detroit in their last outing. Detroit opened the scoring just under six minutes into the game before Pittsburgh tied the game at one just 2:21 later. Kris Letang gave the Pens the lead with just over five minutes to go in the 1st before Patric Hornqvist pushed the lead to 3-1 just 2:53 into the 2nd period. Sidney Crosby made it 4-1 and Hornqvist added his 2nd of the game and the period just 3:58 later to give the Pens an insurmountable 5-1 lead that would hold until the game’s final whistle. Matt Murray picked up the win, improving to 17-7-5 on the year after stopping 27 of 28 shots faced in the winning effort.

Even as a Leafs homer I’ve been trying to find an angle that makes sense to take Toronto here, but the fact is that the Leafs looked bad for most of that game against Buffalo and maybe Frederik Andersen hasn’t been 100% since coming back from injury. Pittsburgh continues to be a model of consistency in the NHL, and the Penguins just keep rolling along, winning games left and right no matter what adversity’s gotten in their way. I just think the Penguins are the team in the better place right now, so I’ll lay the juice with the Penguins at home here.