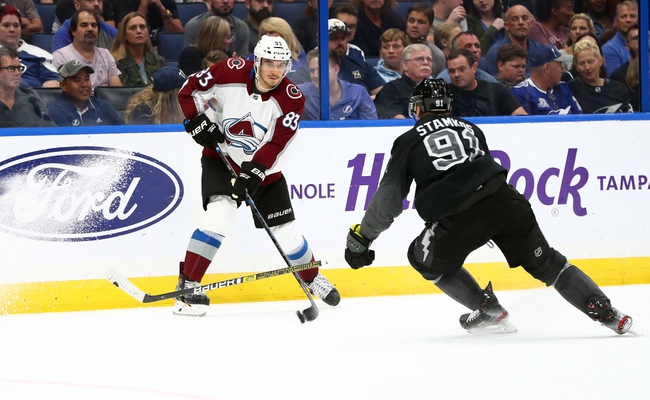 The Tampa Bay Lightning and the Colorado Avalanche meet in NHL action from the Pepsi Center on Monday night.

The Tampa Bay Lightning will look to add another notch after making it ten straight wins after a 5-3 win over the Philadelphia Flyers last time out. Alex Killorn opened the scoring for the Bolts just over three minutes into the game before Cedric Paquette doubled the lead with just over five minutes to go in the opening frame. Carter Verhaeghe made it 3-0 just under three minutes into the 2nd before Philadelphia got on the board just before the nine-minute mark of the 2nd period. The 3-1 score held up for the rest of the 2nd and the first half of the 3rd before Brayden Point restored the three-goal cushion with just over seven minutes to go. Philadelphia struck twice in a span of :44 to make things interesting at 4-3 with just under four minutes to go, but in the end it was too little too late as Tampa Bay ‘s Nikita Kucherov added an empty-netter with just a few seconds to go to secure the win. Andrei Vasilevskiy got the win to improve to 32-9-3 on the year after stopping 30 of 33 shots faced in the winning effort.

The Colorado Avalanche will look to rebound after a 3-1 loss to the Los Angeles Kings last time out. Los Angeles opened the scoring with just under six minutes to go in the 1st before Samuel Girard tied the game at one for the Avs with the lone goal of the 2nd period coming with less than a minute to go in the middle frame. The game looked headed for OT but the Kings would have something to say about that, taking the lead with just :55 to go and icing the win with an empty-netter with just :05 to go. Pavel Francouz took the loss, falling to 13-5-2 on the year after stopping 6 of 7 shots faced in relief of Philipp Grubauer who left the game due to injury earlier in the period.

The low line with Tampa Bay is extremely tempting given the hot streak that the Bolts are on right now, posting their second 10-game winning streak of the year. However, this line is way too thin given the circumstances and I’m thinking someone knows something. Pavel Francouz probably starts here and you can argue that he’s been the better goaltender for the Avs this season. The Avs are due for a better performance after struggling lately and Colorado has played their best hockey on home ice this season. It won’t be a popular pick, but I think Colorado is the way to go here.