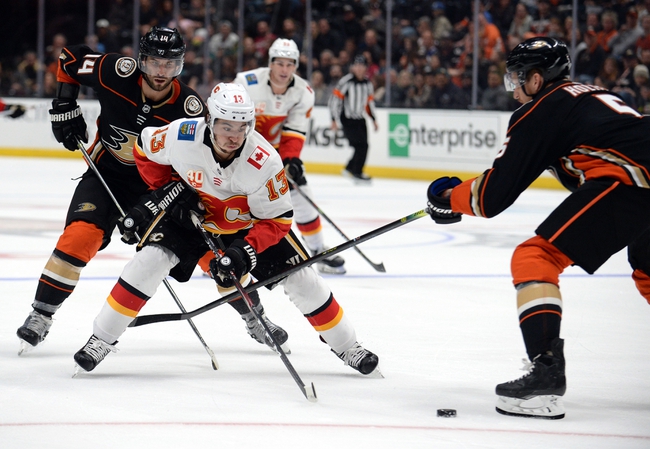 The Anaheim Ducks and the Calgary Flames meet in NHL action from the Scotiabank Saddledome on Monday afternoon.

The Anaheim Ducks will look to build on a 5-1 win over Vancouver in their last outing. Adam Henrique opened the scoring less than six minutes into the game before Derek Grant doubled the lead with just under eight minutes to go in the opening period. Henrique pushed the lead to 3-0 with his 2nd goal of the game early on in the 2nd before Vancouver got on the board with nine minutes to go in the 2nd. Sam Steel restored the three-goal lead early in the 3rd before Brendan Guhle added a 5th Anaheim goal with just over six minutes to go as the Ducks would coast to the win. John Gibson got the win to improve to 17-22-4 on the year after stopping 37 of 38 shots faced in the winning effort.

The Calgary Flames will look to rebound from an 8-4 loss to the Chicago Blackhawks last time out. Chicago opened the scoring just :30 into the game before Sam Bennett tied the game at one just 1:37 later. Chicago re-took the lead just before the midway point of the 1st before Bennett tied the game again with his 2nd goal of the game with just over seven minutes to play in the 1st. Chicago pushed ahead 4-2 with a pair of goals 1:04 apart early in the 2nd but Elias Lindholm cut the deficit back to 4-3 just after the midway point of the middle period. Chicago surged ahead 6-3 with a pair of goals :27 apart. Lindholm pulled another goal back with just under six minutes to go, but Chicago iced the win with a pair of goals 2:11 apart to rack up their 7th and 8th goals as Calgary was sent back empty-handed. Cam Talbot took the loss, falling to 8-9-1 on the year after allowing 4 goals on 13 shots faced in the winning effort after allowing 4 goals on 13 shots faced after relieving David Rittich who allowed 4 goals on 15 shots faced in the losing effort.

Head-to-head, the home team is 58-21 in the last 79 meetings between these two teams.

I’m tempted by the big plus money with Anaheim after how the Ducks handled business against Vancouver, but the problem is that the Ducks have to play on a back-to-back against a Flames team that just beat the Ducks 6-0 last week. This may feel like a nice revenge spot, but I don’t think the Ducks are capable of getting up for that kind of spot, especially on a back-to-back. I’ll lay side with Calgary on the puck line here as I see this being another beatdown.