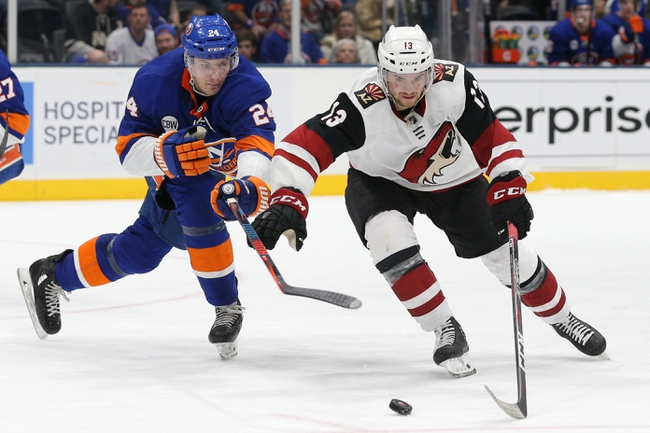 The New York Islanders and the Arizona Coyotes meet in NHL action from the Gila River Arena on Monday afternoon.

The New York Islanders will look to rebound from back-to-back losses after a 1-0 loss to the Vegas Golden Knights in their last outing. The game was scoreless through the opening 20 minutes and most of the 2ndbefore Vegas took the lead with less than a minute to go in the middle period, as Vegas outshot the Islanders 20-4 in the 2nd period. The Islanders couldn’t break through in the 3rd period as Vegas’ tally would hold up as the game winner. Semyon Varlamov took the loss, falling to 17-10-4 on the year after stopping 42 of 43 shots faced in the losing effort.

The Arizona Coyotes will look to build on a solid 3-1 win over the Washington Capitals in their last outing. The game was scoreless through the opening 20 minutes before Christian Dvorak gave Arizona a 1-0 lead just after the seven minute mark of the 2nd period. Washington tied the game with just under three minutes to go in the middle frame, sending us to the 3rd deadlocked at one goal apiece. Phil Kessel gave the ‘Yotes the lead just over five minutes into the 3rd and despite being outshot 14-9 in the 3rd, Arizona would ice the win with an empty-netter from Lawson Crouse in the last minute of the 3rd. Antti Raanta got the win to improve to 12-13-3 on the year after stopping 36 of 37 shots faced in the winning effort.

I get Arizona being favored at home as the Coyotes looked really good against the Capitals and New York has been up and down as of late. However, while the Islanders have cashed in here and there, the fact is that we keep getting these favorable prices and plus money when a lot of times the Islanders are the better team side by side. One win from Arizona isn’t really enough of a sample size to fully say that the Coyotes are turning things around, so I’ll take a shot with New York and the plus money based on the value.