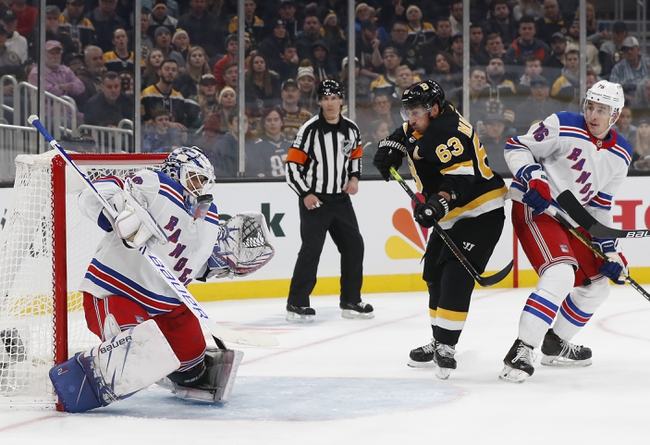 The Boston Bruins and the New York Rangers meet in NHL action from Madison Square Garden on Saunday afternoon.

The Boston Bruins come into this one looking to build on back-to-back wins after a 4-1 win over Detroit last time out. Detroit opened the scoring just over three minutes into the game and the lead would hold up into the 2nd period where Charlie McAvoy tied the game at one just after the eight minute mark of the 2nd period. Patrice Bergeron gave Boston the lead just 1:39 after that and Charlie Coyle chipped in a 3rd goal just 2:50 later. Detroit outshot Boston 12-11 in the 3rd, but David Pastrnak would add another insurance goal to take an insurmountable 4-1 lead for the Bruins. Tuukka Rask got the win to improve to 22-5-6 on the year after stopping 25 of 26 shots faced in the winning effort.

The New York Rangers will try to add to their current four-game winning streak after a 3-1 win over Columbus last time out. Pavel Buchnewich opened the scoring for the Rangers just :22 into the game before Columbus tied the game at one with just over a minute to go in the 2nd. The tie held for most of the 3rd before Chris Kreider broke the tie with just over three minutes to play and Ryan Strome iced the win with an empty-netter just two minutes after that to give the Rangers yet another W. Alexandar Georgiev got the win to improve to 14-11-1 on the year after stopping 36 of 37 shots faced in the winning effort.

I get Boston being favored on the road as the Bruins have been playing the more consistent hockey all year long. However, the Rangers are hot again, are at home where they’ve played their best and are rested. Boston didn’t have the toughest test with Detroit, but the Bruins still have to travel for this game and the Rangers have just had some solid goaltending lately. I’ll take a shot with New York and the plus money here.