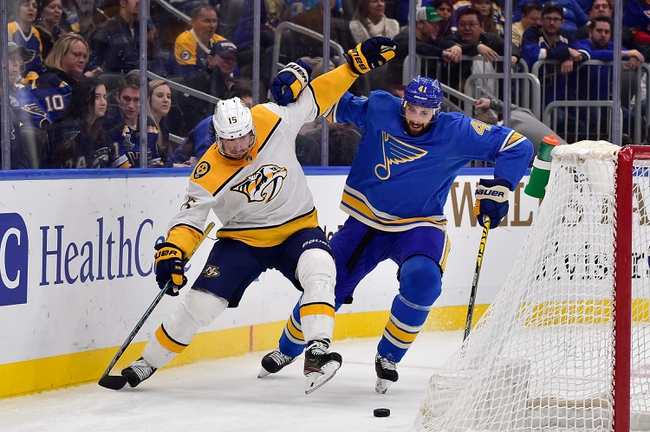 The St. Louis Blues and the Nashville Predators meet in the second half of a home-and-home set from Bridgestone Arena on Sunday evening.

The St. Louis Blues will try to salvage a split to snap a four-game losing streak while Nashville would like to build on back-to-back wins after picking up a 4-3 win over the Blues in the first leg of the home-and-home on Saturday.

The first period saw Viktor Arvidsson open the scoring for Nashville just over six minutes into the frame before Matt Duchene doubled Nashville’s lead with just under eight minutes to go in the period. Zach Sanford got the Blues on the board just over four minutes into the 2nd, but Kyle Turris would help Nashville restore the two-goal cushion just :21 later. Jaden Schwartz would have a response for St. Louis just 1:44 later and Alexander Steen would tie the game at three just past the midway point of the 2nd for St. Louis. Mikael Granlund gave Nashville a 4-3 lead just under four minutes into the 3rd, and that goal would prove to be the difference as Nashville held on for a massive win against the division-leading Blues.

Juuse Saros got the win for Nashville in goal, improving to 11-9-4 on the year after stopping 23 of 26 shots faced in the victory while Jake Allen ended up with the loss for the Blues, falling to 8-6-3 after giving up 4 goals on 27 shots faced in the loss.

Head-to-head, St. Louis is 1-10 in the last 11 meetings between these two teams in Nashville.

I get that it’s hard to beat the same team in as many nights, especially when it’s the defending champions on the other side. However, St. Louis is sliding right now, and Nashville won the harder of the two legs to win the back-to-back by getting the win on the road out of the way first. Now the Predators get to try to take care of business at home which is a spot that the Blues have struggled in lately in terms of trying to win games on the road. I just think this is a spot for Nashville to capitalize on a reeling Blues team, so I’ll lay the juice with Nashville at home here.