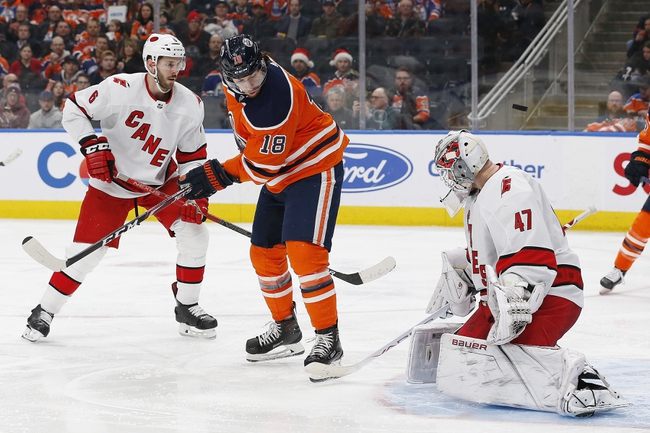 Where to Watch: FS-Carolina Stream live sports and exclusive originals on ESPN+. Sign up now!

The Edmonton Oilers and the Carolina Hurricanes meet in NHL action from the PNC Arena on Sunday afternoon.

The Edmonton Oilers will look to build on a 4-1 win over the Florida Panthers in their last outing. Adam Larsson opened the scoring for the Oilers with the lone goal of the opening period and the lead would hold going through the rest of the 1st and all of the 2nd before Leon Draisaitl doubled the lead just :13 into the 3rd. Florida pulled a goal back later in the period, but Darnell Nurse and Kailer Yamamoto would score empty-net goals 1:12 apart to secure the win and take a big two points from Florida. Mikko Koskinen got the win to improve to 16-11-2 on the year after stopping 33 of 34 shots faced in the winning effort.

The Carolina Hurricanes will look to build on a 5-2 win over the New Jersey Devils last time out. Nino Niederreiter opened the scoring less than four minutes into the game before New Jersey tied the game at one just past the seven minute mark of the period. Will Foegele restored Carolina’s lead just past the midway point of the opening period and Andrei Svechnikov pushed past an insurance goal with the lone tally of the 2ndperiod to make it 3-1 going to the 3rd. Martin Necas added a 4th just 1:44 into the 3rd and Joel Edmundson made it 5 with just over five minutes to play. New Jersey pulled one back just :21 later, but that was as close as the Devils would get as Carolina would hold on for the win. Petr Mrazek got the win to improve to 19-15-2 on the year after stopping 35 of 37 shots faced in the winning effort.

I get the ‘Canes being favored here as they’re strong on home ice and are catching the Oilers on a back-to-back. However, Carolina still isn’t playing overly convincing hockey as of late, at least not enough to justify this price, while the Oilers continue to find ways to with without Connor McDavid in the lineup. I just think there’s too much plus money to be leaving on the table with a capable Edmonton team, so I’ll take a shot with the Oilers and the plus money here.