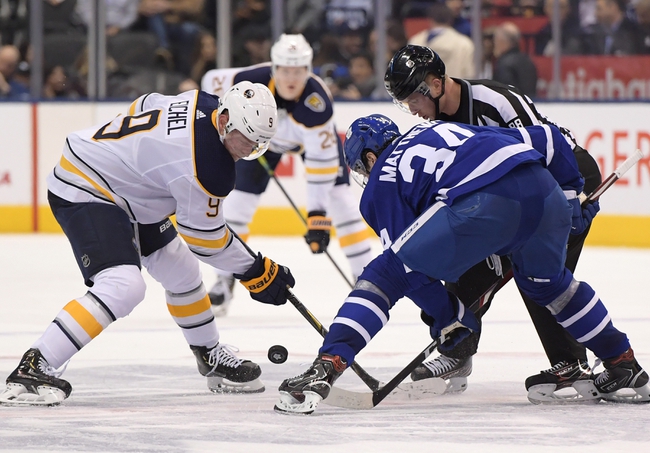 Where to Watch: Sportsnet, MSG-Buffalo Stream live sports and exclusive originals on ESPN+. Sign up now!

The Toronto Maple Leafs and the Buffalo Sabres meet in NHL action from the KeyBank Center on Sunday evening.

The Toronto Maple Leafs will look to build on a 4-2 win over Ottawa last time out. Auston Matthews opened the scoring just over four minutes into the game before Jake Muzzin doubled the lead within the first two minutes of the 2nd period. William Nylander pushed the lead to 3-0 with just over eight minutes to go in the 2nd period before Ottawa finally got on the board with just under four minutes to go in the middle frame. Ottawa cut the deficit to 3-2 just before the midway point of the 3rd, but that’s as close as the Sens got as Mitch Marner iced the win with an empty-netter late in the 3rd. Jack Campbell got the win to improve to 11-10-3 on the year after stopping 25 of 27 shots faced in the winning effort.

The Buffalo Sabres will look to build on back-to-back wins after a 4-3 overtime win over Columbus last time out. Columbus took the lead late in the first period before doubling the advantage just 1:31 into the 2nd period. Jack Eichel got the Sabres on the board late in the 2nd before Victor Olofsson tied the game at two just over two minutes into the 3rd. Evan Rodrigues gave Buffalo a 3-2 lead, but the Blue Jackets would respond with just 1:13 to go, sending the game to an extra period. Olofsson would pot his 2nd of the game with just over two minutes to go to give the Sabres the win and the extra point that comes with it. Carter Hutton got the win to improve to 10-9-4 on the year after stopping 28 of 31 shots faced in the winning effort.

I get plus money is tempting with the Sabres at home as that’s where Buffalo has played their best hockey this season. However, I’m still not a fan of the Sabres, and Toronto just needs to keep winning to keep teams like Florida at a distance from their playoff spot. I expect Freddie Andersen to have a strong second start back from injury after shaking off the rust in the last one, so I’ll side with Toronto for the win here.