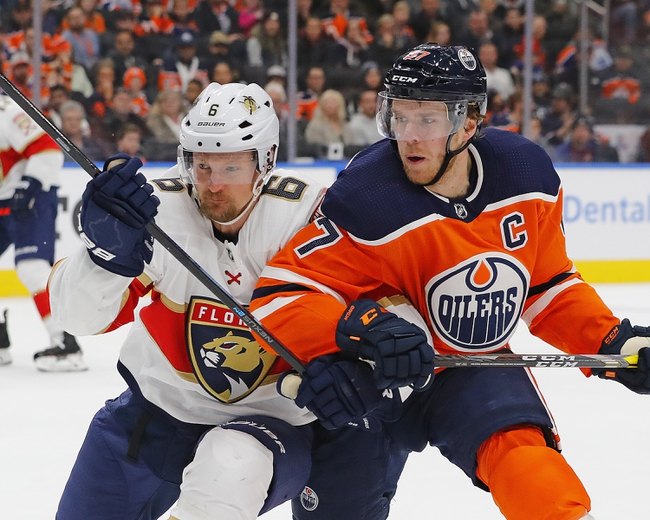 Where to Watch: FS-Florida Stream live sports and exclusive originals on ESPN+. Sign up now!

The Edmonton Oilers and the Florida Panthers meet in NHL action from the BB&T Arena on Saturday afternoon.

The Edmonton Oilers will look to rebound from a 3-1 loss to the Tampa Bay Lightning in their last outing. The game was scoreless through the opening 20 minutes before Tampa Bay finally got on the board first less than five minutes into the 2nd period. Caleb Jones tied the game at one just before the midway point of the 2ndperiod, but the tie was short-lived as Tampa Bay re-took the lead just 3:25 later. Edmonton would outshoot Tampa Bay 13-10 in the 3rd but the Oilers wouldn’t find a game-tying goal as the Lightning potted an empty-netter in the last minute of the game to secure the win and send Edmonton back empty-handed. Mike Smith took the loss, falling to 15-10-4 after allowing two goals on 36 shots faced in the losing effort.

The Florida Panthers will be out to rebound from a 6-2 loss to the Philadelphia Flyers last time out. The Flyers opened the scoring just over four minutes into the game before surging ahead 3-0 by the end of the 1st with a pair of goals :55 apart. Philly added a 4th goal in the last minute of the 2nd period before Jonathan Huberdeau got Florida on the board just :33 into the 3rd. Aleksander Barkov cut the deficit to 4-2, but that was as close as Florida would get as the Flyers would restore the four-goal lead late to lock up the win and give Florida the loss at home. Sergei Bobrovsky took the loss, falling to 20-17-6 on the year after allowing 3 goals on 9 shots before being pulled in the 1st period.

I’ve gone back and forth on this game, as we’ve seen Edmonton come out and play well without Connor McDavid but the Oilers have also had moments where they haven’t looked very good. The same can be said for Florida as the Panthers just looked flat against the Flyers. With that said, both teams have had moments where they’ve looked porous defensively, which is why I’m going to side with the over. Both teams pack some offensive punch and this is a game that I could easily see being 3-3 at some point, getting the over to cash in at 6.5. Give me the over here.