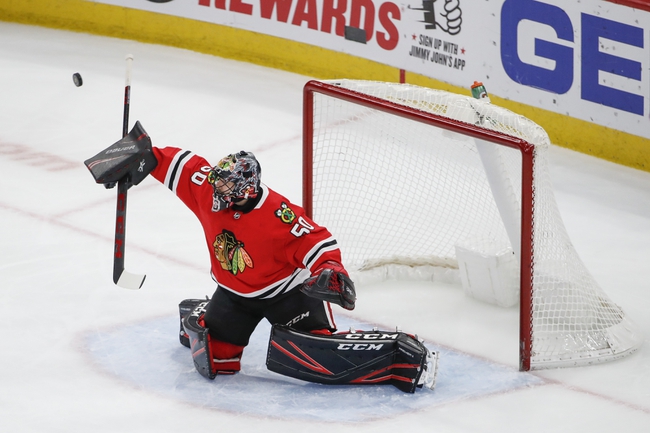 The Chicago Blackhawks and the Calgary Flames meet in NHL action from Rogers Place on Saturday night.

The Chicago Blackhawks will look to snap a five-game losing streak after a 3-0 loss to Vancouver in their last outing. Vancouver scored a goal in every period while Chicago couldn’t find the back of the net despite peppering the Canucks with 49 shots on goal, including 17 in the first period and 16 in the 2nd and 3rd period while Vancouver mustered up no more than 8 shots on goal in a period in the game. Patrick Kane led the Blackhawks with 8 shots on goal while Dominik Kubalik was close behind in 2nd with 7 and Jonathan Toews had 5 shots on goal. Corey Crawford took the loss, falling to 10-15-3 on the year after allowing two goals on 19 shots faced in the losing effort.

The Calgary Flames will look to add on a 6-0 walloping of the Anaheim Ducks in their last outing. Elias Lindholm opened the scoring for the Flames just over eight minutes into the game before Mikael Backlund and Oliver Kylington scored 1:29 apart to push Calgary’s lead to 3-0 and Mark Jankowski added a 4th goal in the last minute of the opening frame to push the advantage to 4-0. Backlund added his 2nd of the game short-handed late in the 2nd period and Jankowski added his 2nd just under seven minutes into the 3rd to give Calgary six goals for good measure in the win. Cam Talbot got the win to improve to 8-8-1 on the year after stopping all 44 shots faced in the winning effort for his first shutout of the season.

The plus money with Chicago is tempting as the Blackhawks are still a team that I’m high on. However, Chicago’s falling apart right now at the worst possible time as this is not what the team wants when a playoff push is about to start over the last month or so of the season. Calgary’s had issues at home lately, but they’ve had Chicago’s number in recent meetings and are brimming with confidence after slapping the taste out of Anaheim’s mouth last time out. I’ll lay the juice with Calgary here until Chicago shows me some signs of life.