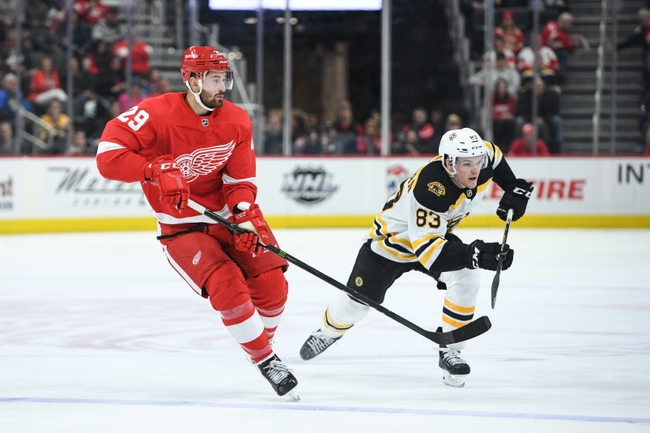 The Detroit Red Wings and the Boston Bruins meet in an Atlantic division matchup from the TD Garden on Saturday afternoon.

The Detroit Red Wings will look to rebound from back-to-back losses after a 4-1 loss to the New Jersey Devils in their last outing. The game was scoreless throught the opening 20 minutes and most of the 2nd period before Andreas Athanasiou gave the Red Wings the game’s opening gal with just over three minutes to play in the 2nd. The Wings took the lead into the 3rd where the Devils would proceed to score four goals in a span of four minutes to take a 4-1 lead that the Red Wings would not be able to chip away at for the rest of the game. Jonathan Bernier ended up with the loss, falling to 12-16-2 on the year after allowing all 4 goals on 26 shots faced in the losing effort.

The Boston Bruins will look to build on a 4-1 win over the Montreal Canadiens last time out. David Pastrnak opened the scoring for Boston just before the seven minute mark of the opening period before doubling his tally and Boston’s lead just over four minutes into the 2nd. Montreal would pull a goal back just :36 later, but Pastrnak would complete his hat trick and restore Boston’s two-goal lead with just over four minutes to go in the middle period. The Bruins would ride that lead until late in the 3rd when Patrice Bergeron iced the victory with an empty net goal for the Bruins to secure the win. Tuukka Rask got the win, improving to 21-5-6 on the year after stopping 28 of 29 shots faced in the winning effort.

I get that Detroit is the worst team in the league, and I’m not disputing that. But this line is downright outrageous. These two teams have already played twice this season, and Detroit has won both meetings by a combined score of 7-3. Go further back, the Red Wings have won the last five meetings by a combined score of 20-10.  I’m not sure it’s a beatdown, but the chance to more than triple my money with a team that’s beaten Boston twice in as many attempts this season is too good to pass on, even with Detroit. Give me the Red Wings and the truckload of plus money here.