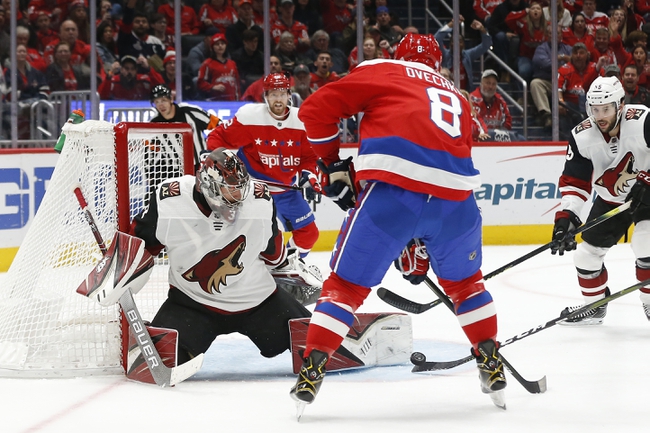 The Washington Capitals and the Arizona Coyotes meet in NHL action from the Gila River Arena on Saturday night.

The Washington Capitals will look to build on a 3-2 come-from-behind win over Colorado last time out. Colorado jumped in front less than three minutes into the game and doubled their last with less than four minutes to go in the opening period before Nicklas Backstrom got the Capitals on the board with the lone goal of the 2nd period. Tom Wilson tied the game at two with just over seven minutes to go before T.J. Oshie potted the eventual game-winner with just over two minutes to go in regulation, handing the Capitals a much-needed road win. Braden Holtby got the win to improve to 21-11-4 on the year after stopping 32 of 34 shots faced in the winning effort.

The Arizona Coyotes will look to rebound from a 3-2 loss to the Ottawa Senators last time out. Ottawa jumped out to an early lead less than three minutes into the game before the Senators doubled the lead just 3:51 later. Oliver Ekman-Larsson got Arizona on the board with just over three minutes to go in the 2nd period but Ottawa would respond just under seven minutes into the 3rd. Jordan Oesterle replied for Arizona just 2:11 later, but despite their best efforts, Arizona wouldn’t find a game-tying goal the rest of the way as Ottawa held on for the win. Antti Raanta took the loss, falling to 11-13-3 on the year after allowing 3 goals on 31 shots faced in the losing effort.

The plus money would be tempting given Washington’s struggles in Arizona, but the fact is that the Capitals are the much better team that plays better hockey on the road than at home, and we’re getting a pretty decent price with Washington on the road against an Arizona team that can’t catch a break right now. The Coyotes lose to a bad Senators team and also find out that their top goaltender in Darcy Kuemper suffers a setback in his training and his return to the line up is delayed even further. I just don’t like the spot for Arizona, so I’ll lay the juice with Washington on the road here.