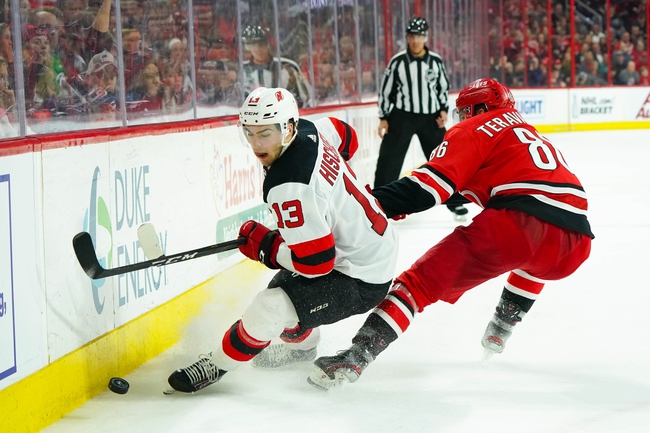 Where to Watch: FS-Carolina, MSG+ Stream live sports and exclusive originals on ESPN+. Sign up now!

The New Jersey Devils and the Carolina Hurricanes meet in NHL action from the PNC Arena on Friday night.

The New Jersey Devils will look to build on a 4-1 win over the Detroit Red Wings in their last outing. The game was scoreless through the opening 20 minutes before Detroit gave the game the opening goal late in the 2ndperiod. Andy Greene tied the game at one for New Jersey just after the five-minute mark of the 2nd, followed by a goal from Wayne Simmonds just 1:44 later to give the Devils a 2-1 lead. Simmonds struck again just 1:43 later to make it 3-1 and Jesper Bratt added a 4th goal just :33 later to give the Devils four goals in four minutes and jump out to a 4-1 lead that they’d ride to the finish line. MacKenzie Blackwood got the win to improve to 18-12-7 after stopping 25 of 26 shots faced in the winning effort.

The Carolina Hurricanes will look to rebound from a 4-1 loss to Dallas last time out. Dallas opened the scoring just under eight minutes into the game before Sebastian Aho tied the game at one with just over two minutes to go in the 2nd period. Carolina’s luck would start to run out later in the 2nd as the Stars struck twice in a span of 2:30 to take a 3-1 lead at the 2nd intermission and iced the win with an empty-netter with just over a minute to play, sending Carolina back empty-handed. Petr Mrazek ended up with the loss, falling to 18-16-2 on the year after allowing 3 goals on 36 shots faced in the losing effort.

I think it’s safe to say that Carolina is the better team here and especially at home the ‘Canes should be favored. However, New Jersey’s been playing really well since the all-star break, picking up at least a point in all but one game, and the Devils have gone 5-4-1 in the second half of a back-to-back this season which isn’t terrible. The Devils have also had a lot of success against the Hurricanes in recent years, so I’ll take a stab at New Jersey on the puck line here to start with a goal as the price there isn’t terrible and we have a bit of a safety net.