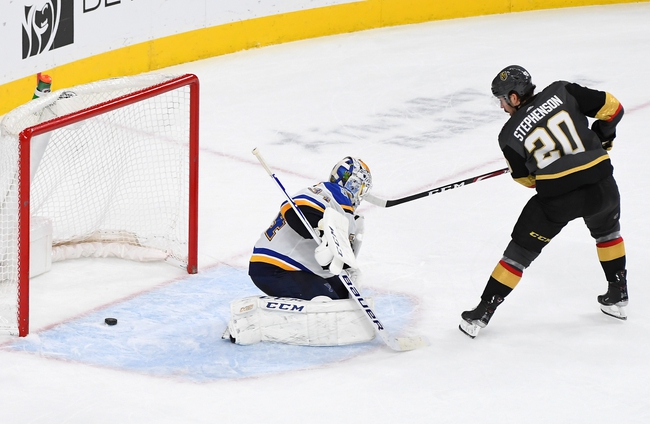 The St. Louis Blues and the Vegas Golden Knights meet in NHL action from the T-Mobile Arena on Thursday night.

The St. Louis Blues come into this matchup with a bit of rest but have also had to deal with a lot in the last couple of days as their last game with the Anaheim Ducks was postponed after Jay Bouwmeester collapsed on the bench due to a cardiac episode and was taken to hospital. Thankfully, Bouwmeester has been reported to be in stable condition after the episode, but now it is up to his teammates to perform in his absence now that their fallen teammate is being taken care of. Only time will tell if the Blues will be fully ready to go for this game or if it’s going to take some time to get past.

The Vegas Golden Knights will look to rebound from back-to-back losses after a 4-0 loss to the Minnesota Wild in their last outing. The Wild jumped out to an early lead just 5:30 into the game and doubled their lead with just over seven minutes to go in the opening period. Minnesota pushed the lead to 3-0 just before the midway point of the 2nd period and added a 4th goal for good measure late in the 2nd period. Neither side really got much going offensively in the 3rd period as Minnesota held on for the win and the shutout victory, sending Vegas back empty-handed here. Marc-Andre Fleury took the loss, falling to 21-14-5 on the year after allowing 4 goals on 20 shots faced in the losing effort.

Normally, I’d consider taking a flyer on St. Louis as Vegas probably isn’t worth laying this kind of price right now, even at home. However, St. Louis hasn’t been great on the road to begin with, and you’d have to imagine that St. Louis will have Jay Bouwmeester on their minds and it’s hard to get over a scenario like the one that happened on Tuesday night on a quick turnaround, even with a day in between to let it pass over. I just think St. Louis won’t fully be in the right headspace for this game and the Golden Knights can take advantage. I’ll lay the juice with Vegas at home here.