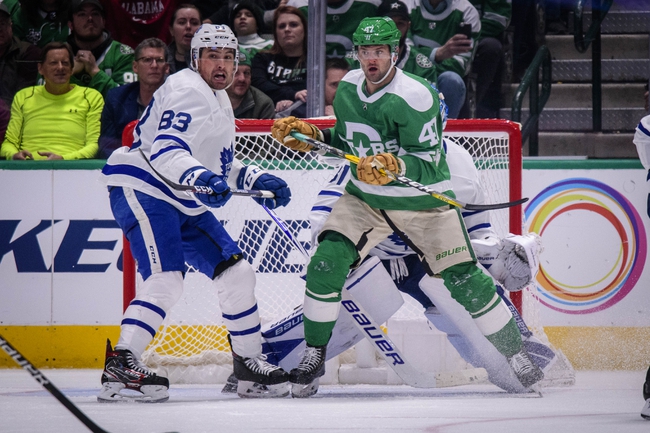 The Dallas Stars and the Toronto Maple Leafs meet in NHL action from the Scotiabank Arena on Thursday night.

The Dallas Stars will look to build on back-to-back wins after a 4-1 win over Carolina last time out. Jamie Benn opened the scoring for the Stars just under eight minutes into the game before Carolina tied the game at one late in the opening frame. Denis Gurianov and the aforementioned Benn would push Dallas’ lead to 3-1 with a pair of goals 2:30 apart later in the 2nd. Benn would complete his hat trick by burying an empty-netter in the last 1:19 of the game. Anton Khudobin got the win to improve to 14-7-1 on the year after stopping 24 of 25 shots faced in the winning effort.

The Toronto Maple Leafs will look to build on a 3-2 overtime win over Arizona last time out. Arizona opened the scoring just 1:04 into the game before Zach Hyman tied the game at one for Toronto later in the 1st. Arizona re-took the lead in the final minute of the 2nd period before Hyman tied the game again with his 2nd goal of the game 1:33 into the 3rd period. The rest of the 3rd solved nothing, so it was off to overtime where Arizona thought they had the game won, but goaltender interference waved off the Coyotes’ game winner, which gave Kasperi Kapanen to score the game winner on a partial breakaway with just over a minute to play in the extra frame. Jack Campbell got the win to improve his record to 10-10-3 on the year after stopping 35 of 37 shots faced in the winning effort.

The plus money with Dallas is definitely worth a look given how well Dallas has performed against the better teams in the NHL as of late. However, the Stars have struggled with the Maple Leafs in recent years, and the Leafs look like they’re finally getting comfortable with Jack Campbell in goal or could be getting their number one goalie back in Freddie Andersen. Call it a homer pick if you must, but I just like the way Toronto has battled lately and I think the Leafs get a big confidence building win here so I’ll lay the juice with Toronto at home here.