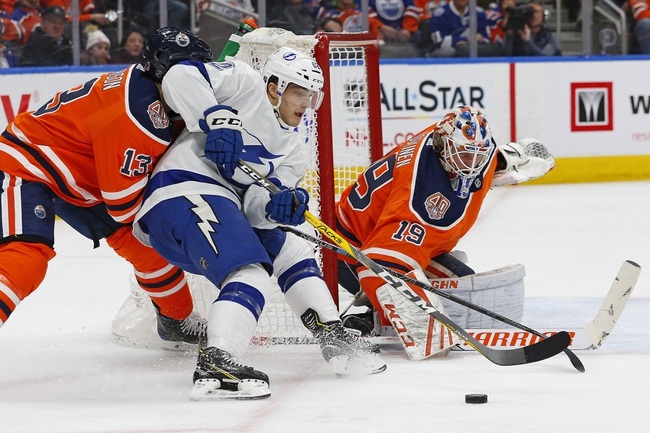 The Edmonton Oilers and the Tampa Bay Lightning meet in NHL action from the Amalie Arena on Thursday night.

The Edmonton Oilers will look to build on back-to-back wins after a 5-3 win over Chicago last time out. Riley Sheahan opened the scoring for the Oilers just 1:13 into the game but the Blackhawks would push ahead 2-1 with just under six minutes to go in the opening period. Kailer Yamamoto tied the game at two just 2:59 later before Chicago took the lead just 1:45 into the 2nd period. Yamamoto tied the game at three for Edmonton just 1:53 later and Ryan Nugent-Hopkins gave the Oilers a 4-3 lead just 1:12 after that. The lead would hold up through all of the 2nd and most of the 3rd before Leon Draisaitl potted the empty-netter to give the Oilers the insurance goal and lock up the win. Mike Smith got the win to improve to 15-9-4 on the year after stopping 38 of 41 shots faced in the winning effort.

The Tampa Bay Lightning will look to add to their current eight-game winning streak after a 2-1 overtime win over Pittsburgh last time out. Pittsburgh opened the scoring just past the midway point of the opening period before Mikhail Sergachev tied the game at one for Tampa Bay just before the four minute mark of the 2ndperiod. The game would remain deadlocked at one through the rest of the 2nd and all of the 3rd. The game ended up in OT, where Yanni Gourde found the game winner just past the midway point of the extra period to give the Bolts the win and the extra point that goes along with it, also extending their winning streak in the process. Andrei Vasilevskiy got the win to improve to 30-9-2 on the year after stopping 35 of 36 shots faced in the winning effort.

The heavy plus money is tempting with Edmonton given how well the Oilers played in their first game without Connor McDavid for the next couple of weeks. However, Edmonton can only go so far without their captain, and Tampa Bay isn’t a team I’d want to go up against without McDavid, especially when they’re on another one of their patented winning streaks. I just see the Bolts dispatching another opponent here, and I think the Bolts offense wakes up here as well so to cut down the heavy juice, I’ll take Tampa Bay on the puck line here.