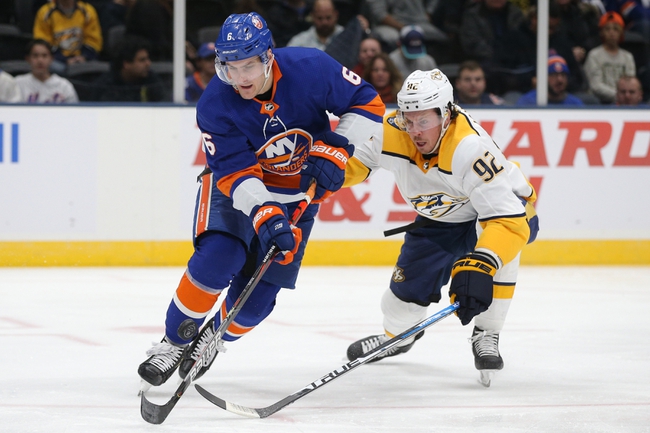 Where to Watch: MSG+2, FS-Tennessee Stream live sports and exclusive originals on ESPN+. Sign up now!

The New York Islanders and the Nashville Predators meet in NHL action from Bridgestone Arena on Thursday night.

The New York Islanders will look to build on back-to-back wins after a 5-3 win over the Philadelphia Flyers last time out. Josh Bailey, Matt Martin and Jordan Eberle pushed the Isles out in front 3-0 by the end of the opening period with their goals coming in a span of 7:51. Philadelphia cut the deficit to 3-2 just after the midway of the 2nd period and tied the game with just 1:32 to go in the 3rd. Overtime looked likely before Ryan Pulock gave New York the lead again with just :41 to go and Leo Komarov with an empty-netter with just :04 to play. Semyon Varlamov got the win to improve to 17-9-4 on the year after stopping 35 of 38 shots faced in the winning effort.

The Nashville Predators will look to rebound from back-to-back losses after a 6-2 loss to Vancouver last time out. Vancouver jumped out to a lead just over seven minutes into the game and pushed ahead 3-0 with a pair of goals 1:07 apart later in the opening frame. The Canucks added a 4th in the opening minute of the 2ndperiod before Craig Smith and Mikael Granlund cut the deficit in half just 1:06 apart later in the 2nd. Vancouver responded with two minutes to go in the 2nd and restored the four-goal lead just 2:32 into the 3rd period and Vancouver would ride that lead to the finish line. Pekka Rinne took the loss, falling to 17-13-3 on the year after allowing 4 goals on 17 shots faced in the losing effort.

I get Nashville being favored at home, but the problem is that the Predators haven’t been playing well in their last couple of games and being outscored 9-4 in their last two games doesn’t inspire a world of confidence, even if both games were on the road. The Islanders are starting to show fight against some of the better teams in the NHL, and I think that the Isles are the better team here as well, so I’ll take the Islanders and the plus money here.