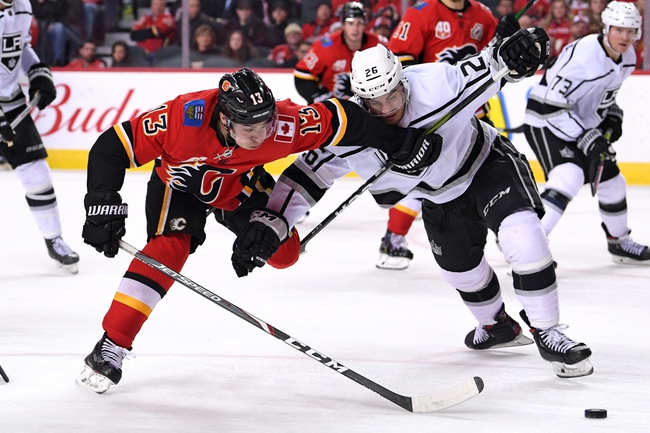 The Calgary Flames and the Los Angeles Kings meet in a Pacific division matchup in NHL action from the Staples Center on Wednesday night.

The Calgary Flames will look to build on back-to-back wins after a 6-2 win over San Jose in their last outing. Milan Lucic and Tobias Rieder scored :34 apart to take an early 2-0 lead before Zac Rinaldo pushed the lead to 3-0 just before the midway point of the opening period. San Jose pulled one back just over three minutes later and cut the deficit to 3-2 just under five minutes into the 2nd but the Flames would restore the two-goal lead just past the midway point of the 2nd period thanks to Mark Jankowski. Matthew Tkachuk would push the lead to 5-2 early in the 3rd and Mikael Backlund would pitch in a 6th Calgary goal for good measure with just under six minutes to go in the game as Calgary would ride that four-goal cushion to the final horn. David Rittich got the win to improve to 22-14-5 on the year after stopping 34 of 36 shots faced in the winning effort.

The Los Angeles Kings will be out to snap a five-game losing streak after a 4-1 loss to the New York Rangers last time out. New York jumped ahead 1-0 early, just 2:23 into the game as a matter of fact and the Rangers would carry that lead through all of the 1st and all of the 2nd before doubling the lead just before the midway point of the 3rd period. Trevor Moore got the Kings on the board just 1:27 later, but the Rangers would restore the two-goal lead with just under three minutes to go and would ice the result with an empty-netter just :37 later. Jonathan Quick ended up with the loss to fall to 11-22-5 on the year after giving up 3 goals on 40 shots faced in the losing effort.

Los Angeles has played their best hockey at home by far this season. However, the losses are piling up to the point that the Kings just don’t have any value regardless of where they’re playing. Calgary has started to pick up their play on the road as of late, and the fact of the matter is that the Flames are just the better team here. I’ll lay the juice with Calgary on the road in this spot.