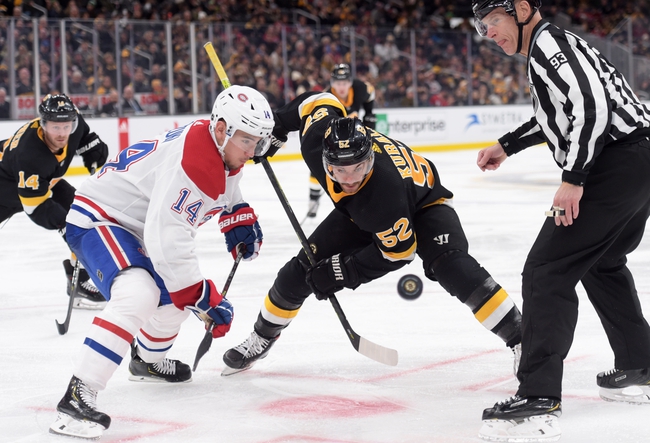 The Montreal Canadiens and the Boston Bruins meet in NHL action from the TD Garden on Wednesday night.

The Montreal Canadiens will look to rebound from a 3-2 loss to the Arizona Coyotes in their last outing. Jake Evans and Brendan Gallagher staked Montreal an early 2-0 lead within the first 1:52 of the game with a pair of goals 1:01 apart, but the Habs didn’t know that that was where their luck was going to run out as Arizona pulled a goal back just 3:16 later. The ‘Yotes would tie the game at two late in the 2nd period and we were looking headed for overtime but Arizona would break the tie with just one minute to play. Montreal had the chance late to tie the game but couldn’t break through, taking the loss while Arizona walked out with a big road win. Carey Price took the loss, falling to 24-18-4 on the year after stopping 31 of 34 shots faced in the winning effort.

The Boston Bruins will look to rebound from a 3-1 loss to the Detroit Red Wings in their last outing. The game was scoreless through the opening 20 minutes before Detroit took the lead early in the 2nd. The lead would hold through the 2nd before Torey Krug tied the game at one for Boston just :33 into the 3rd period. Detroit would re-take the lead just past the seven minute mark of the 3rd despite Boston outshooting Detroit 13-7 in the 3rd and 39-20 in the game, Detroit would ice the win with an empty-net goal in the last 30 seconds of the game. Tuukka Rask got the loss, falling to 205-6 on the year after allowing two goals on 19 shots faced in the losing effort.

The Canadiens need to pick up wins regardless of who or where they play, and their recent run of form could make the plus money worth a look. However, while Montreal does have a win over Boston this season, the Habs have lost the last two meetings with Boston by a combined score of 11-2. Montreal needs this game, but Boston has been too good at home to look past here. I’m not laying this kind of juice though, so I’ll side with Boston on the puck line as I see a 4-2 game with a Boston empty-netter late.