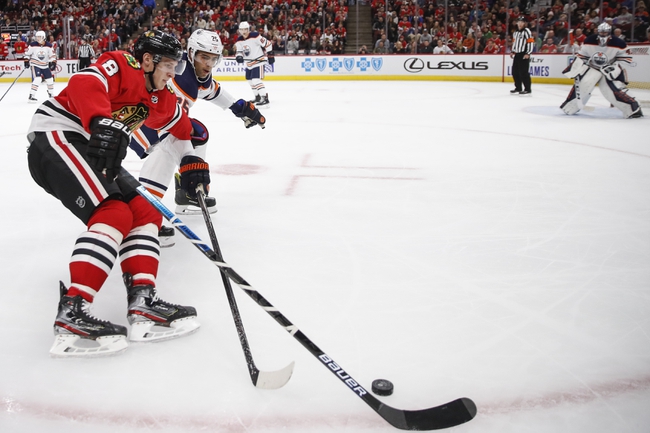 The Chicago Blackhawks and the Edmonton Oilers meet in NHL action from Rogers Place on Tuesday night.

The Chicago Blackhawks will be out to snap a three-game losing skid after a 5-2 loss to Winnipeg in their last outing. Dominik Kubalik opened the scoring for Chicago just :15 into the game before Brandon Saad doubled the lead with just over nine minutes to go in the opening period. Winnipeg pulled a goal back in the 2nd and rallied together for a four-goal 3rd period to take a 5-2 lead and put the game far out of reach for Chicago in the losing effort. Corey Crawford took the loss for Chicago, falling to 10-14-3 on the year after allowing 3 goals on 34 shots faced in the defeat.

The Edmonton Oilers will look to build on a 3-2 win over Nashville last time out. Nashville opened the scoring with the lone goal of the opening period and doubled their lead late in the 2nd but Alex Chiasson would get the Oilers on the board with just :09 to go in the middle period. Leon Draisaitl would tie the game at two less than four minutes into the 3rd and would give the Oilers a 3-2 lead with just under seven minutes to go as Edmonton would ride that 3-2 cushion to the finish line. Mike Smith got the win to improve to 14-9-4 on the year after stopping 27 of 29 shots faced in the winning effort.

I’ve been burned a bit by the Blackhawks lately, but the fact remains that Chicago is still playing decent hockey and need the wins to keep their heads above water in the playoff race. Edmonton has a tendency to play down to a lot of teams and I don’t think that’s a recipe for success against a Chicago team that’s still got talent and is hungry for a win. I’ll take a shot with Chicago and the plus money here.