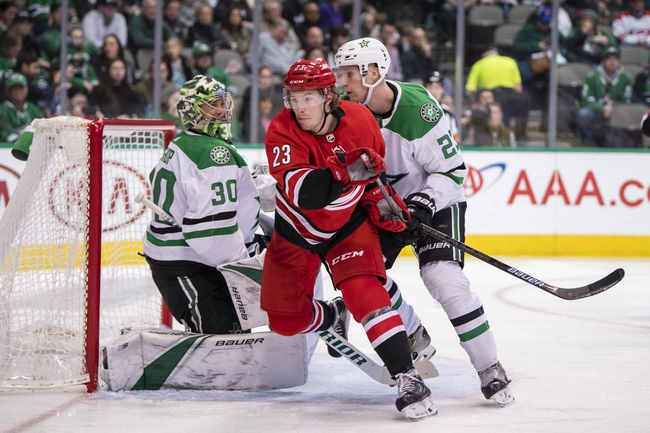 Where to Watch: FS-Southwest, FS-Carolina Stream live sports and exclusive originals on ESPN+. Sign up now!

The Carolina Hurricanes and the Dallas Stars meet in NHL action from the American Airlines Center on Tuesday night.

The Carolina Hurricanes will look to build on back-to-back wins after a 6-5 shootout win over Vegas in their last outing. Vegas jumped out to a 2-0 first period lead with a pair of goals 1:09 apart before Teuvo Teravainen got the ‘Canes on the board in the last minute of the 1st period. Vegas restored the two-goal lead in the first minute of the 2nd period before Sebastian Aho pulled a goal back just 1:19 into the 3rd. Vegas restored their two-goal lead again just :58 later, but Erik Haula would answer just 1:59 later and Haydn Fleury tied the game at four before Martin Necas gave the Hurricanes a 5-4 lead with just over six minutes to go. Vegas would tie the game again just 2:09 later, and that tie would force OT. Overtime solved nothing, so it was off to the shootout where Carolina scored on two of their three attempts while Vegas missed both of their shootout tries to give Carolina the win and the extra point. James Reimer got the win to improve to 14-6-1 on the year after allowing 5 goals on 38 shots faced in the winning effort.

The Dallas Stars will look to build on a 3-2 overtime win over St. Louis in their last outing. St. Louis took an early 2-0 lead with a pair of goals 3:31 apart before Jamie Benn got the Stars on the board later in the opening period. Roope Hintz tied the game at two in the later stages of the 2nd period, but neither side would find a go-ahead goal in the rest of the 2nd and all of the 3rd so it was off to OT where Hintz found his 2nd goal of the game just before the midway point of the extra period. Anton Khudobin got the win to improve to 13-7-1 on the year after stopping 23 of 25 shots faced in the winning effort.

I considered the Hurricanes and the plus money, but the fact is that the Hurricanes struggle against Dallas, even if the two sides only play twice a year. Dallas is also rock solid at home while the Hurricanes are still hard for me to fully trust on the road. I just think we’re getting a low price on a team playing the better hockey so I’ll take it and lay the juice with Dallas here.