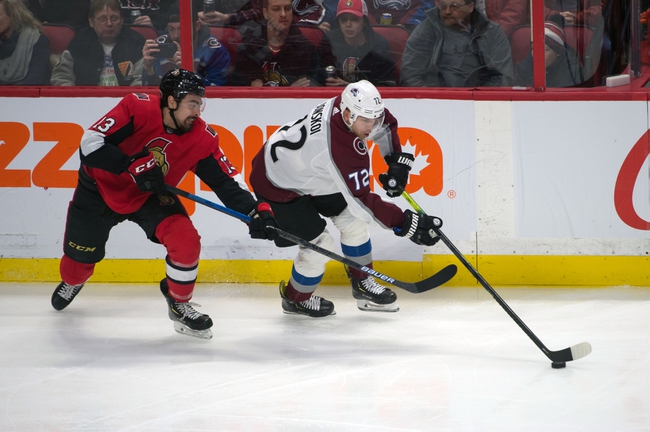 The Ottawa Senators and the Colorado Avalanche meet in NHL action from the Pepsi Center on Tuesday night.

The Ottawa Senators will be out to snap a five-game losing streak after a 5-2 loss to Winnipeg in their last outing. Winnipeg opened the scoring with the lone goal of the opening period before Jean-Gabriel Pageau tied the game at one just :25 into the 2nd period. The Jets surged ahead 3-1 with just under three minutes to go in the 2nd before Mikkel Boedker cut the deficit back to 3-2 but the Jets would restore the two-goal lead just 1:19 later. Winnipeg would add a 5th just before the nine-minute mark of the 3rd period, taking an insurmountable 5-2 lead that the Jets would ride to the finish line. Craig Anderson took the loss, falling to 7-13-2 after allowing 4 goals on 22 shots faced in the losing effort.

The Colorado Avalanche will look to add to their current four-game winning streak after a 3-2 win over Minnesota in their last outing. All of the scoring came in the 2nd period as Pierre-Edouard Bellemare opened the scoring just 1:37 into the middle frame. Minnesota tied the game at one just before the five minute mark of the period but Nathan MacKinnon and Gabriel Landeskog would score 3:14 apart to push ahead 3-1. Minnesota would pull one back late in the 2nd, but as previously mentioned, the 3rd period wouldn’t see any scoring, sending the Wild back empty-handed while the Avs picked up a big road win. Pavel Francouz got the win to improve to 13-4-2 on the year after stopping 34 of 36 shots faced in the winning effort.

I wish I could say the price alone makes the plus money with Ottawa worth a look. However, these two teams are just headed in different directions right now as Ottawa just keeps getting in their own way and the Senators find new ways to lose hockey games on a night-to-night basis. Colorado’s picked up wins in four straight and I’d be hard-pressed to think that they don’t make it five here. I’ll take Colorado on the puck line to get some value out of the bet.