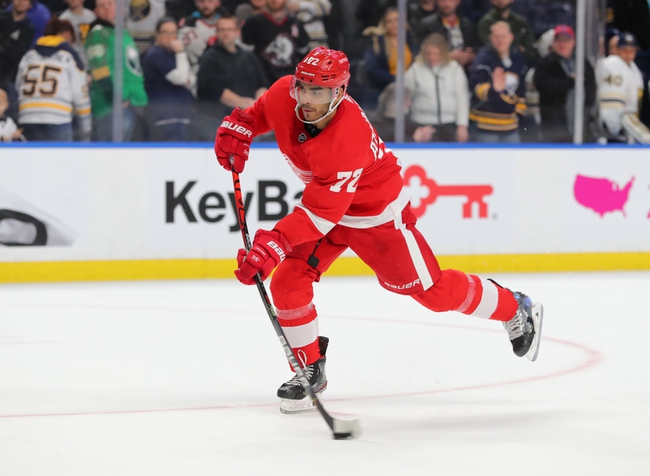 Where to Watch: FS-Detroit, MSG-Buffalo Stream live sports and exclusive originals on ESPN+. Sign up now!

The Detroit Red Wings and the Buffalo Sabres meet in an Atlantic division matchup in NHL action from the KeyBank Center on Tuesday night.

The Detroit Red Wings will look to build on a 3-1 win over Boston in their last outing. The game was scoreless through the opening 20 minutes before Brendan Perlini gave the Wings the lead with the lone goal of the 2ndperiod just over two minutes into the middle period. Boston would tie the game at one just :33 into the final period but Andreas Athanasiou would restore Detroit’s lead just past the seven minute mark of the 3rd and AA would ice Detroit’s victory with an empty-netter in the final minute of play. Jonathan Bernier got the win to improve to 12-14-2 on the year after stopping 39 of 40 shots faced in the winning effort.

The Buffalo Sabres will look to rebound form a 3-2 loss to the Anaheim Ducks in their last outing. Anaheim jumped out to a 3-0 lead with just eight minutes to go in the opening period before Johan Larsson got the Sabres on the board with just over a minute to play in the 1st and Rasmus Dahlin would cut the deficit to 3-2 with just over eight minutes to go in the 2nd period. The Sabres would outshoot the Ducks 15-6 in the 3rdperiod, but Buffalo wouldn’t be able to tie the game as the Ducks slammed the door shut on any comeback attempt. Jonas Johansson took the loss, falling to 0-1-1 on the year after allowing all 3 goals on 28 shots faced in the losing effort.

I get Buffalo being favored at home, but the problem I have is that the Sabres aren’t playing well enough to warrant this kind of price tag even against the Red Wings. Detroit has a tendency of winning games in bunches, as well as winning games that they probably shouldn’t win. I’ll take a shot with Detroit as more of a fade from this price with Buffalo more than anything.