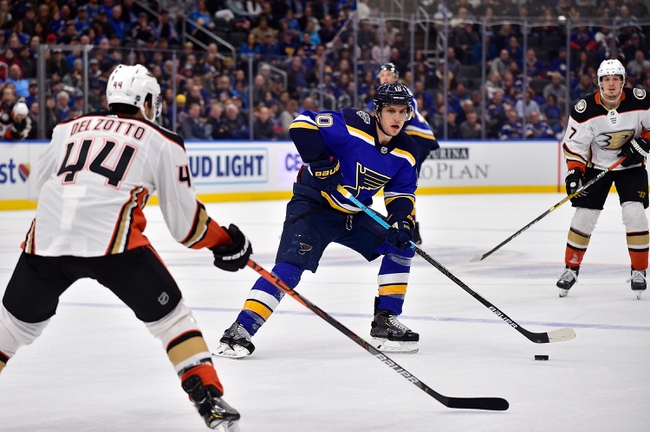 Where to Watch: FS-West, FS-Midwest Stream live sports and exclusive originals on ESPN+. Sign up now!

The St. Louis Blues and the Anaheim Ducks meet in NHL action from the Honda Center on Tuesday night.

The St. Louis Blues will look to rebound from back-to-back losses after a 3-2 overtime loss to Dallas last time out. Colton Parayko staked the Blues an early 2-0 lead with a pair of goals 3:31 apart in the middle of the first period but the Stars would pull a goal back with just over two minutes to go in the opening period. Dallas found an equalizing goal in the 2nd half of the 2nd period to knot things up at two, and neither side would take another lead the rest of the way in regulation, so it was off to overtime where Dallas would bury the game winner just before the midway point of overtime. Jordan Binnington took the loss, falling to 24-10-6 on the year after stopping 31 of 34 shots faced in the losing effort.

The Anaheim Ducks will look to add to their five-game point streak after a 3-2 win over Buffalo in their last outing. Jakob Silfverberg, Ryan Getzlaf and Nick Ritchie all scored in a span of 5:45 in the middle of the opening period. Buffalo would pull a goal back with just over a minute to go in the 1st and would cut the deficit to 3-2 midway through the 2nd period. Despite outshooting the Ducks 15-6 in the 3rd, the Sabres wouldn’t get any closer as Anaheim held on for the road win. Ryan Miller got the win to improve to 7-5-3 on the year after stopping 31 of 33 shots faced in the winning effort.

Maybe I have a fever or I’m hallucinating, but I think there’s value with the Ducks in this spot. The Blues are still a Stanley Cup contender without question, but the Blues have forgotten how to win on the road as of late and are going through a rough patch that all teams go through at one point or another. Anaheim has picked up at least a point in all five games so far this month and I just think this is a game that the Ducks will get themselves up for. I’ll take a shot with Anaheim and the plus money in this one.